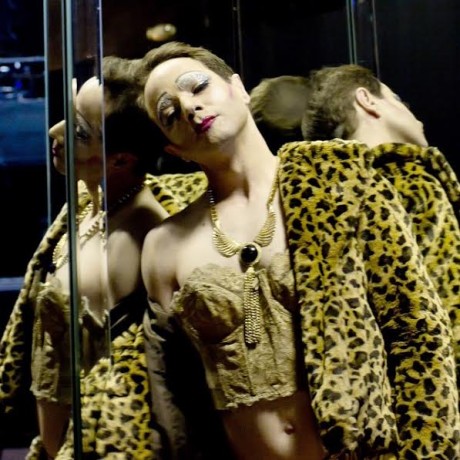 Posted By: Online Editoron: May 27, 2015In: Weld for Birmingham
Print Email

When Neil Patrick Harris took the stage during the 2014 Tony Awards as Hedwig to perform “Sugar Daddy” in a long blond wig, it was clear that Hedwig and the Angry Inch isn’t just a musical about actors in drag.

On June 2, Birmingham’s Dane Peterson Theatre Series will breathe new life into the production to reveal a touching story about life, love and identity, with artistic director Peterson in the title role and Marcus Lane directing,

The musical, which premiered off-Broadway in 1998, came to Broadway in 2014 and earned Tony Awards for stars Neil Patrick Harris and Lena Hall, as well as the award for Best Revival of a Musical.

“Hedwig And The Angry Inch tells of ‘internationally ignored song stylist’ Hedwig Schmidt, an East German rock ‘n’ roll goddess who also happens to be the victim of a botched sex-change operation,” said Dane Peterson in a press release. “This show is 90 minutes of pure adrenaline, outrageous make-up, fabulous costumes, over-the-top wigs, loud rock and roll and a fierce story.”

Hedwig presented by the Dane Peterson Theatre Series, will run June 2–13 at the Virginia Samford Theatre. Tickets are $25 and available at virginiasamfordtheatre.org. Tickets for the opening night gala, which includes a reception following the performance, are $45.

The Wiz — Red Mountain Cabaret Theater. 301 19th St. N. Catch Red Mountain Theatre Company’s production of the Tony Award-winning musical, The Wiz, before it closes. The Wiz is the classic story of Dorothy remixed with soul, gospel and jazz show-stoppers. Featuring a cast comprised solely of Birmingham talent, the performance is directed by Broadway’s Rufus Bonds Jr. Thursday through Saturday, 7:30 p.m.; Sundays, 2 p.m.; Saturday, May 23 at 2 p.m. Through May 31. $30. For more information, visit redmountaintheatre.org.

Tribes — Birmingham Festival Theater. 1901 11th Ave. S. Opening Thursday May 28 at the Birmingham Festival Theater, Nina Raine’s award-winning Tribes is a play about families — the tribes we are born into and the tribes we fit in with. For Billy, a young man born with deafness into a hearing family that never bothered to teach him sign language, the possibility of a new tribe is a foreign idea — until he meets Sylvia, a young woman born to deaf parents who is in the process of losing her hearing as well. Thursday–Saturday 8 p.m., and Sunday June 7, 2 p.m. Through June 13. $20. For more information, visit bftonline.org.

Becoming Dr. Ruth: An Unexpected Journey — Terrific New Theatre. 2821 Second Ave. S. Karola Siegel was a child when she fled the Nazis in the Kindertransport. She was a scout and sniper for the Haganah in Jerusalem and then struggled as a single mother in America before taking on perhaps the most unlikely career: a television network sex therapist. The Terrific New Theatre brings Mark St. Germain’s play to life in this honest and humorous production about the real life of Dr. Ruth K. Westheimer. Thursday–Saturday at 8 p.m., and Sundays 2:30 p.m. $25. For more information, visit terrificnewtheatre.com.