LATEST NEWS
Home Weld for Birmingham Back from the dead 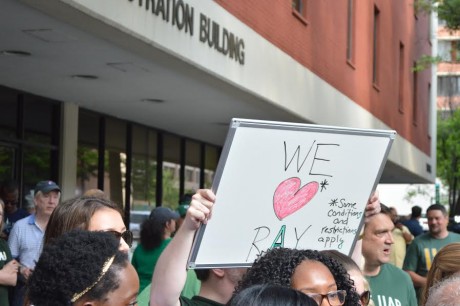 Back from the dead

After Ray Watts’ announcement to reinstate the football, rifle and bowling teams at the University of Alabama at Birmingham, many in the crowd of several hundred people gathered outside chanted “Fire Ray Watts!”

Inside, during the press conference, Watts was asked when the decision to reinstate the program was made. The embattled UAB president responded, “I made this decision today.”

In a prepared speech, Watts thanked everyone for their support and said there is still a long road ahead before play can be resumed on the gridiron. He did not set a date as to when a team would take the field, but he did mention that Bill Clark is still the head football coach.

After reviewing the initial financial report that indicated football at UAB would not be sustainable, Watts said, “From this information, our leadership determined that over the next five years an additional $17.2 million would have to be raised from external resources and contributors to return football, rifle and bowling.”

In addition to that, he said, in order to build “a proper practice field and facility,” the cost would be around $13 million. Watts said that $17 million has been pledged already.

“We said from the very beginning that football could only return if we could generate sustainable funding to cover the cost and build facilities that make us competitive,” Watts said. “Today, six months later, we are in a different position.”

Watts said that pledges for financial support have been pouring in like never before since the initial announcement to disband the sports programs. “Many have come from people who have never supported UAB football. And they’ve come in an unprecedented amount,” Watts continued.

After his speech, Watts seemed nervous at times while answering questions from the phalanx of reporters. Several times he walked away from the podium as if to leave only to return to answer another question fired from the media audience.

He said that there has been no timeline established for when all of the $30.2 million he said it would cost to reinstate the teams and build new facilities—would be raised. Also, he alluded to the fact that the new Blazers football team might not play at Legion Field.

“We will be working on those operational plans as we move forward… We have had good discussions with the mayor and the city of Birmingham and with our community business leaders about them taking responsibility to build a new stadium that we can participate in and brings great attention to Birmingham, similar to Regions Field,” Watts said.

The concept of building a domed stadium in Birmingham has been floated by city officials throughout the years. Watts said that to infer the decision to reinstate UAB football is tied into a renewed push for a domed stadium would be wrong.

“The mayor is committed to work towards building a new facility. What type of facility and where will be the focus of the people who drive that process. We would be pleased to play in either, [a dome stadium or a smaller, on-campus facility],” Watts said.

UAB Athletic Director Mark Ingram said the university will continue working with Conference USA to establish a return date for the football team. “What our interest is, is to make sure we maintain our FBS level as we make progress. So this week and next week we are going to continue to work with them and the NCAA to determine that,” Ingram said.

“I wouldn’t say 2016 is our goal necessarily, but our goal is to return as soon as possible,” Ingram said.

Ingram said he doesn’t expect the initial decision to dismantle the football team and the subsequent fallout will have a lasting impact on recruiting future players and coaches deciding to play at UAB.

“I think that our coaches and all of our staff will see this renewed commitment from the community. It’s greater than what we have ever had and I hope that they will feel that energy and they will see our intention is to put them in a position to win championships,” Ingram said.

“Our intention is to do as our peers do and fund all our athletic facilities through private donations. It’s the challenge faced by nearly every single athletic director and I’m excited about that,” Ingram continued, adding that after completing two New York Marathons he craves a good challenge.

Watts said that UAB will continue to spend $20 million on the football team annually, as was the case prior to the 2014 decision to end the program. “There is still work to be done. We need to raise these funds for the facilities. And we will do that and we have faith in the leadership who has stepped forward to lead that effort,” Watts said.

Outside, after the announcement, the crowd of UAB supporters were jubilant. However, many were still calling for Watts’ resignation.

Derek Weaver, a UAB alumnus, said that all faith in Watts’ leadership has been lost, even with those in UAB’s medical programs. “I don’t think he has the trust of the students, faculty or the majority of the medical school. When a guy who has been a doctor has lost the support of the medical school, there is no point in him being here,” Weaver said.

Behind Weaver, amid the crowd calling for Watts’ resignation, a man was holding a sign that read, “We Love Ray,” with an asterisk. In smaller print, the sign read, “Some Conditions and Restrictions Apply.”