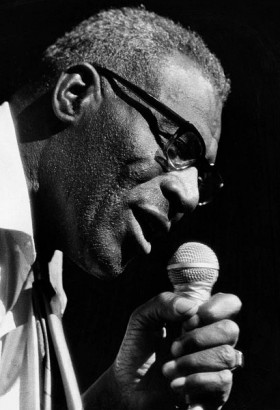 The night the wolf howled

So many events occurred 50 years ago that proved pivotal in the struggle for racial equality: the Selma march, the Voting Rights Act, the Watts riot. Much has been written about these occurrences, placing them firmly on the timeline of history.

But let’s not forget Shindig!

On Thursday night, May 20, 1965, a white, white kid named Brian Jones introduced a black, black man called Howlin’ Wolf to a nationwide television audience on the ABC network. Music ensued, of a sort not many people had ever beheld in their living rooms before. As historian Peter Guralnick put it, “Mainstream America for the first time saw the real face of the blues. It was epic.”

In 1965, de facto segregation was still being practiced in many strata of society. White supremacists in local governments did their utmost to keep public race mixing to a minimum, but they had no jurisdiction over radio’s airwaves.

The ascendance of Elvis Presley in the 1950s, fusing white and black musicality, helped desegregate radio. Inspired by postwar rhythm and blues beats, rock and roll made room for all races, and top-40 radio of 1965 was a showcase of mind-bending diversity, with old-school orchestra leaders such as Horst Jankowski and Bert Kaempfert getting to play alongside the Temptations and the Four Tops; Roger Miller and Patti Page with the Supremes and Little Anthony; the Beatles and Elvis and Dylan up there with James Brown and Sam Cooke.

One other group crashed the charts in a big way that year. Like the Beatles, the Rolling Stones got their big break in America on The Ed Sullivan Show, appearing about eight months after the Fab Four debuted in February 1964. Whereas the Beatles were marketed as “lovable,” the Stones were positioned as scruffy and sinister, despite their middle-class upbringings.

Perhaps what passed for sinister in some minds was the Stones’ unabashed love of American blues music. The Beatles showed their R&B roots —Little Richard, Larry Williams, The Coasters — in their early compositions, but the Stones preferred covering straight blues by the likes of Elmore James, Jimmy Reed and Muddy Waters (a song by whom the Stones took their name).

This was an inspirational genre for Brian Jones, who started the band in 1962. Though Mick Jagger and Keith Richards would eventually push him out of the group, in the beginning Jones called the tunes for the fledgling band, some of which were made famous by Chester Burnett.

Born in Mississippi in 1910, Burnett was taught the blues by some of the greatest Delta practitioners. The man who came to be known as Wolf was a big man with a voice to match, and when he went to Memphis in 1951 to record with Sam Phillips he hit with a song called “How Many More Years.”

“When I heard Howlin’ Wolf, I said, ‘This is for me,’” Phillips, who became Elvis’ producer, said later. “’This is where the soul of man never dies.’”

Among the classic Wolf tracks that Jones collected were “Spoonful,” “Smokestack Lightning” and the single he decided the Stones should cover in 1964, “Little Red Rooster.”

The song’s deliberate tempo and overt sexual imagery didn’t deter the fans. “Rooster” went to number one on the British charts, the first time an American blues song had ever attained that position. In America, the record company chickened out, releasing the more mainstream “Heart of Stone” instead.

Perhaps that contretemps was in the back of Jones’s mind when the band was booked on Shindig! during the Stones’ third American tour in 1965. Shindig! was a blatant attempt to cash in on ‘60s youth culture, but what differentiated this show from other such network offerings was its emphasis on quality rock and roll acts.

The show’s producers thought it a good idea to bring Wolf and the Stones together, but some network executives are said to have resisted the idea of the 54 year-old black man sharing the stage with the teenybopper faves. The Stones reportedly let it be known that if Wolf couldn’t be on, neither would they.

Hunt around on YouTube and you can see what transpired. Billy Preston is playing an upright piano as the clip fades in. Show producer Jack Good makes some small talk with Mick and Brian about running into Howlin’ Wolf at a Chicago restaurant. Brian interrupts saying, “It’s about time you shut up and we have Howlin’ Wolf onstage.”

From stage left the massive presence descends to the microphone as Preston chords an intro that sounds like James Burton playing licks on the front as the camera deferentially approaches the singer. The Wolf is wearing a suit and a tie, but he’s carrying a harmonica in his huge right hand.

“How many more years have I got to let you dog me around?” he asks, in a voice that sounds as though it’s coming from the bottom of a mineshaft. It is the first song he cut with Sam Phillips when Brian Jones was nine years old.

He repeats the question, pointing his index finger for emphasis, then sings, “I’d soon rather be dead sleeping six feet in the ground,” and then he makes his harmonica sound like cemetery wind.

The camera cuts to Jones, almost literally sitting at the feet of his idol.

Then the Wolf leaps into the air three times and blows another solo. Ordinarily, the Shindig! dance troupe would be surrounding an artist, tossing their hair as they danced the dance of the moment, but on this evening they are perched on bar stools, clapping at a distance.

There’s a twinkle in his eye, but menace in his manner.

“And if anybody asks about me, darlin’, tell ‘em I walked out on you. When I was doing right,” he continues, “You couldn’t believe a word I said. You think I’m crazy, but I can’t let you have your way.”

And with one more solo, his hips begin to swing like that upstart Presley’s did, his knees knock and his left arm flails, and for its own protection the camera retreats to the balcony.

If you listen carefully to the applause, you might be able to hear the veil of the temple rending or Hassan I Sabbah muttering, “Nothing is true, everything is permitted.”

As author Ken Kubernik assessed it afterward, “I don’t think there’s been anything that radical on TV since then. This was a profound paradigm shift — the Stones in general, Brian in particular, introducing our own culture back to an entire generation of baby boomers. We’d have had no possibility of being exposed to Howlin’ Wolf or Muddy Waters without them.”

Shindig! would last three more months, Brian Jones four more years. The Wolf returned to the core of the earth in 1976 and what’s left of the Stones will play in Atlanta June 8. I don’t know if there’s a moral in all that, but I am pretty sure the soul of man never dies.