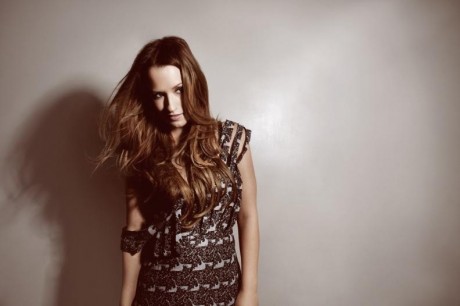 Ingrid Michaelson comes to Iron City on June 5. Photo courtesy of the artist.

Hymn for Her are one of those bands whose genre descriptors sound more like a chaotic collage rather than anything specific — they categorize themselves as “punk folk/thrash country acid blues.” But there are simpler ways to describe the band’s music. It’s basically Americana/blues with a few embellishments, such as a surprisingly emotive electric cigar box guitar. That’s not to say that Hymn for Her aren’t worth seeing, though — the two-piece can certainly put on a show.

Ingrid Michaelson’s latest album Lights Out has been her most successful to date, with catchy earworms like “Girls Chase Boys” receiving major radio play. Michaelson, an indie pop singer songwriter, is known for her emotional songs – and, with this album, her choral arrangements and vocal harmonies. For Friday’s show, she’ll be joined by power-pop band Jukebox the Ghost and Brooklyn pop group Oh Honey.

Seasick Records are moving to a new location, 5508 Crestwood Boulevard, and are hosting an all-day event to celebrate. Ono Ice will provide refreshments throughout the day, while the Audiovore and DJ Sinkhole (who may or may not be related to the now-infamous Clairmont Sinkhole) will spin records from 6-8 p.m. The day will round out with a performance from Tennessee rock band Pujol.

Mexican vocalist Ximena Sariñana got her start with the inaccurately titled debut album Mediocre, which received acclaim from publications like Rolling Stone. While her self-titled sophomore effort released in 2011 saw the 29-year-old singer experimenting with lyrics in English, last year’s No Todo lo Puedes Dar is a return to her Spanish roots, complete with minimalist pop instrumentation and some catchy songwriting.

KYLE comes from the school of singer/rappers spawned by the success of Kanye West’s 808s & Heartbreak and Drake. But while those musicians are typically focused on melancholy introspection, KYLE is distinctly upbeat. Even weightier tracks like “Wait on Me,” in which KYLE admits, “I’m trying to get through this verse without [expletive] crying,” have driving beats. And when he’s dealing with lighter material, such as the get-off-your-cellphone anthem “Just a Picture,” he is positively catchy and compulsively danceable.