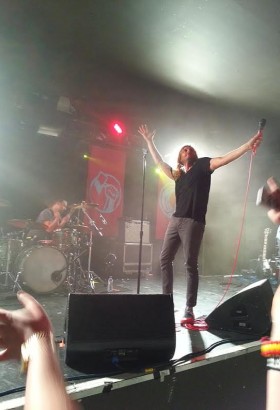 The happy accidents of Awolnation

Aaron Bruno is Awolnation. So are Kenny Carkeet, Drew Stewart, Isaac Carpenter and Marc Walloch, but Bruno writes all of the material himself. The band exploded behind the success of their song “Sail,” which sold over five million copies in the United States according to the RIAA. They’re back with 2015’s Run, another blend of electronic and rock music that’s a licensing dream; Awolnation has provided the soundtrack to a lot of your primetime lineup in recent years, with appearances in such shows as Pretty Little Liars, Sons of Anarchy and The Good Wife.

Ahead of the band’s June 9 performance at Iron City, Bruno spoke about sudden and sustained success and about recreating a sound reliant on studio tools in a live setting.

Weld: There were four years between your debut album, Megalithic Symphony, and Run — how did you spend that time?

Aaron Bruno: I mostly was on the road. What happened was, Megalithic came out and it just kept hitting new strides throughout that 3-4 year period. Just when we thought it was fading out, something else would happen to take the record to another dimension. It was a happy accident for me. As time went on, it allowed me to – I didn’t have to ask for time to make the new record, it was just there in front of me. I was able to take the pace that I wanted in order to perfect this second record.

Weld: How collaborative is your writing process? Did you work with the other guys in the band on the new record at all on the road?

AB: There’s no collaboration at all.

Weld: With that disconnect, is it difficult to recreate the sound that you create in the studio in a live setting?

AB: No, because I’m never trying to copy the sound of the record. I’m trying to take it to another place live. I’m trying to do my best to promote the album, but at the same time, show people a different live experience within the album.

I never go to see bands and hope that they sound identical to their recording. I want to hear the main parts that I came to see: the melody, the lyrics, the beats and the grooves in general. My hope is that it sounds much heavier and more raw and a little dirtier live. That’s what we bring to the table. If anything, it causes the songs to morph into another place and another form, so it becomes even more exciting to play these songs live.

Weld: You recruited drummer Isaac Carpenter since the last record – how did you meet and how did you decide to collaborate?

AB: I met him when he was in a band called Loudermilk, that I believe was signed to Rick Rubin’s label at the time. Me and Drew [Stewart], my guitar player now, we were in a band called Hometown Hero.

Both of our bands were opening for Weezer in, I want to say 2003 or 2004, maybe? We weren’t even on the same stage. What Rivers [Cuomo, Weezer’s frontman] had put together back then was — they would do amphitheaters, but they would have these side stages so when people were coming into the show, they would have something to watch before the main show started. So we were the opener for the opener, in a lot of ways. [Laughs]

Us and Loudermilk, we just hit it off. Every time they would play, I would be sitting Indian-style with a whiskey drink in my hand and my jaw dropped to the floor watching my favorite drummer just blast my face every single night. Or afternoon, because we didn’t even get to play at night.

Going full circle, going through all of these travels and running into Isaac again — and basically begging him to join the band — here we are now.

Weld: You covered Springsteen on the 50 Shades of Grey soundtrack. Why did you choose that track?

AB: I didn’t really choose that song as much as it chose me. Someone high up in the music department of that film was a fan of Megalithic Symphony and she came by to take a listen to some of my newer stuff for other possible looks in other films, possible scores and whatnot. She mentioned that that was going to be a massive soundtrack and that they were looking for covers.

I had never read the book — I didn’t know anything about the film or the book. She mentioned…out of the songs that she mentioned that would be covered, “I’m On Fire” was the one of all of them that I loved. It was such a beautiful, great, great song. So I took it as an opportunity to kind of exercise the creative process of covering someone else’s song. It’s kind of a hassle-free situation. I’m so used to writing all of the melody and lyrics and everything that goes into it, so it was kind of fun for me to take a step back and just put a little strange twist on a song that was arguably already perfect. All I could do was mess the thing up.

I did it in one day, took a more low-fi, raw approach to it and gave her the song. A year later, I found out it was going to be on the soundtrack. I really didn’t think anything was going to come of it. I just thought it was a fun opportunity to explore that side of myself.

Weld: Do you ever throw that or any other covers into the live set?

AB: No, we don’t. We played that once before it was released, and maybe even before it was picked up for the movie since it was fresh off the top of my head. We had a stripped down, rooftop performance in Hollywood where we weren’t even allowed to play our heavier stuff. So I thought, “Okay, let’s throw in some of the softer songs and let’s throw in ‘I’m On Fire.’” People responded pretty well. I was actually shocked how many people knew the song, considering that it’s older.

And I see how old I’m getting now, when I see younger folks that have no idea what I’m talking about. Born in the U.S.A. and one of my favorite albums of all time is Nebraska — I find that so many people don’t even know what that record is in my travels.

We got a good reaction from the song and I was really pleased that people knew the song.