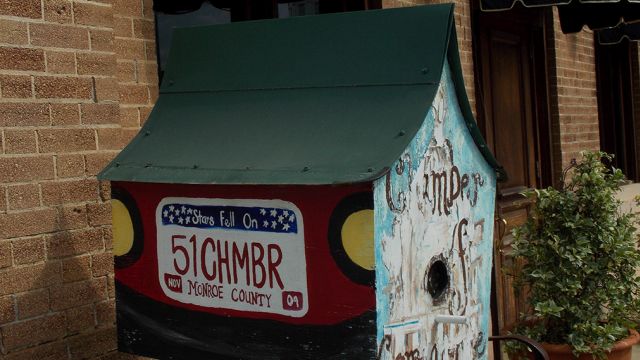 On a sunny spring day in Monroeville, deep in the southwestern part of the state, there are mockingbird houses everywhere. In this town, home to Harper Lee, the celebrated author of the novel “To Kill a Mockingbird,” talk of Atticus Finch, Scout, Jem, Dill, Boo Radley and others is always in order.

This spring, talk for residents and visitors alike has been of the biggest “Mockingbird” news in decades – that Lee’s unpublished novel, “Go Set a Watchman,” a sequel to “Mockingbird,” is due to come out this summer. It is huge news in the literary world and, if possible, even bigger in Monroeville – proclaimed by the state Legislature “The Literary Capital of Alabama.”

Here, tourism, one of the mainstays of the Monroe County economy, is set for a big shot in the arm. Legions of devoted fans are expected to make the pilgrimage to this place where these beloved characters were born.

Fans await debut of Harper Lee’s next novel from Alabama NewsCenter on Vimeo.

The quiet town square, dominated by the evocative presence of the old courthouse, is widely believed to be the basis for the town of Maycomb in “Mockingbird.” A play based on the book has been regularly on view in that courthouse since 1991, drawing thousands from all over the world to this friendly hamlet. The courthouse itself has been turned into a museum filled with, among other things, photos of Gregory Peck and the cast of the acclaimed movie adaptation of the novel, and of the various members of the play’s cast over the years.

“I would say everyone is excited about that new book,” says Sandy Smith, executive director of the Monroeville Monroe County Chamber of Commerce. “I mean how many books today are printed in a two-million volume first edition?”

When the news emerged about “Go Set a Watchman,” the chamber staff was at an expo in Orange Beach. Smith says that 4,000 visitors came through the chamber’s booth “and almost every one of them had something to ask about this new book of Harper Lee’s, which kind of surprised me because word had just gotten out. And when I got back here, from being at that exhibit, I just noticed that it seems like we’ve had a lot more people just randomly coming into the town to visit and see the town and go to the museum. It seems like that has increased a lot.”

It also appears, Smith notes, there are people who are particularly excited to buy the book from Lee’s hometown. “We have this little bookstore called Ol’ Curiosities and Book [Shoppe] and they’re down on West Claiborne Street. They have pre-sold 5,000 copies of this book. Well, you know,” she says, “the population of Monroeville is a little over 6,000. So that shows you the impact that that new book has had, coupled with “To Kill a Mockingbird.’”

Monroeville residents are used to tourists. Some 30,000 people visit the town each year.

Tourism brings in more than $8.4 million a year to Monroe County, according to the Alabama Tourism Department, and almost $114,000 through the Alabama state lodging tax. While that’s far less money than Monroe County’s heavy industry, it is important for both the bottom line and the community’s public image.

The folks who deal with outsiders the most, the ones downtown at the chamber and the old Monroe County Courthouse and the public library and the shops, welcome strangers with the kind of Southern charm that’s convincingly sweet, not saccharin, not – as Southerners like to say – put on.

When they talk about their town, its most famous living resident and all her literary creation has brought to them, it’s with earnestness and pride.

“I love the, I guess, just the humanity of everyone, being able to understand everyone and knowing where they come from,” says Stephanie Rogers, executive director of the Monroe County Museum. “People are such neighbors around here. I was telling a group that came in … last week, that you know, there is a part in “To Kill a Mockingbird” where Miss Maudie says ‘Neighbors bring food with death, and flowers with sickness,’ and she goes on to talk about Boo Radley being their neighbor. But people still do that here.”

Rogers grew up in Monroeville but went away to college. When she got married, she and her husband wanted to move back to her hometown. That’s not an uncommon story in Monroeville.

It must be said that locals will point out that Nelle Harper Lee isn’t their only claim to literary fame. Her childhood friend Truman Capote also spent time in Monroeville. Novelist Mark Childress and Pulitzer Prize-winning journalist Cynthia Tucker also hail from Monroeville. The Alabama Writers Symposium annually takes place in town.

Monroeville and the surrounding county also have a long industrial heritage. Vanity Fair Mills, the largest textile manufacturer in the world, was once the town’s biggest employer. The mill is closed, but Fruit of the Loom, the company that bought Vanity Fair, has a distribution center here. Wood and wood products like paper remain the biggest industry in Monroe County, even though many, many jobs have been lost over the years, Smith says. She adds that the city and the county are working hard to bring more industry into the community.

But it seems unquestionable that Lee’s literary legacy and the tourism it has spawned is what put Monroeville on the map for most of its visitors.

“I would be the one who would stand on the middle of the courthouse square and shout it from a pedestal: Tourism is our industry right now,” Rogers says. “I firmly believe it. Yeah, timber is huge and you could probably show me figures that would completely rebuff what I’m saying to you,” but tourism – mostly around “Mockingbird” – has turned Monroeville into a tourist Mecca, and put it on many literary travelers’ must-do lists.

After all, this is a town boasting a Mockingbird Inn and Suites, Radley’s Fountain Grill, and the Maycomb Mall antique store. There is a plaque near the old courthouse dedicated by the Alabama State Bar to Atticus Finch, replete with the kind of eloquent summation of the man and his virtues that would make a living lawyer flush with pride. And there is a picture of a mockingbird on the logo of the city and the Monroeville Monroe County Chamber of Commerce.

Not surprisingly then, the town’s love for “Mockingbird” and concern for respecting the wishes and the privacy of its author leans demonstrably to the protective side.

It seems the townsfolk are keeping a watchful eye on Lee’s right to be left alone.

“Everything we do is to be respectful of her wishes but at the same time to celebrate what she’s written because it’s had such an enormous impact,” she says. “It’s influenced me. It’s influenced my children. Our family life. It’s just a huge influence on us.”

Smith used to speak to Lee when she would see her around town. “I’d say, ‘Hi, Miss Lee.’ Did we ever discuss anything about the book? No way!” she says with a laugh. “But as far as having lunch at the Sweet Tooth Bakery – ‘How’s the food?’ – yes.”

Local lore has it that discussing “Mockingbird” with Lee is just not something you do, says Annie Hill, director of operations at the museum in the old courthouse. Hill, who has not met Lee, has heard the story from others. “You don’t just run out and say, ‘Hey Miss Lee, I’m Annie Hill.’ She likes her privacy and we like giving it to her.”

Still, there are lots of stories about how Lee used to come into town regularly. She used to, for instance, come down to the Monroe County Library for book signings – for other authors, says Bunny Nobles, the head librarian. “We’re real proud of Nelle,” she says. “She’s the most unpretentious, private person you can imagine.”

Nobles, whose father and sister once served as mayors of Monroeville, recalls that “Nelle” was a childhood friend and classmate of her sister’s.

“Nelle used to come home with Anne and said she really loved my mother, because Mama ­– my mother was real entertaining and charming, if I do say so, she was – and my mother had taken the player piano out of my grandmother’s old hotel. And she and Nelle would sit there and play and sing and have a good time.

Nobles also has another connection to the “Mockingbird” legacy: The library is the former LaSalle Hotel, once owned by her grandmother. Peck stayed there for 10 days when he was researching the role of Atticus Finch, which won him an Oscar. The place where he slept is now called “the paperback room,” Nobles says.

“He did! He and his wife Veronique stayed right up on the second floor in the paperback room. We need to put a plaque. … We have a big claim to fame.

“I was a young teenager, and I remember, I think our parents were a lot more excited about Gregory, especially the ladies. … The town,” she remembers, “was abuzz.”

In more recent weeks, Monroeville has been abuzz with a controversy over the “Mockingbird” play. Dramatic Publishing, the Illinois company that has owned the rights to the play, had threatened to pull the plug on the production starting in 2016. But in late April the company announced that Lee had formed a nonprofit, the Mockingbird Company, which will begin putting on the show – still featuring the hometown Mockingbird Players – next year.

Performances for the play, which runs from mid-April through mid-May, were sold out through the final show of this season, May 16. Part of the reason is excitement over “Go Set a Watchman.”

When the new novel comes out July 14, the town and the county expect to have a big celebration for what will no doubt become Lee’s second bestseller, for her legacy, her community and the throngs of her fans from all over the world. But the plans are still forming; folks in Monroeville say they want to see what publisher Harper Collins wants to do, and most of all, to make sure they’re respectful of Lee’s wishes.

The new book will bring new visitors to Monroeville, boosting the economy and introducing some to a town they think they know from “Mockingbird.” They may be surprised that unlike many tourist areas, Monroeville would love for some of them to stay and find a home.

New people, bringing their businesses and investing in the community, could do a lot for Monroeville, Rogers says. “We would love for people to stay.”

Anyone willing to trade life in the big city will find what keeps drawing people who grew up here to come back: a pleasant way of life, Smith says.

“We are a friendly town,” she says “We treat people the way we want people to treat us. So the best thing I can say about this town is if you come here you’re going to find a lot of friends, you’re going to have a good quality of life, and it’s a great place to raise a family.”