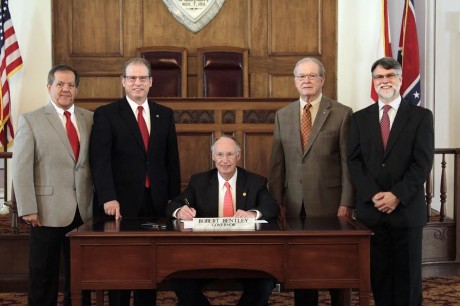 Governor Robert Bentley signs naloxone bill into law. With Bentley, from left to right, are Dr Lee Chamoun, a dentist from Jefferson County who was a staunch proponent of the bill, Rep. Allen Treadaway, R-Warrior, the original sponsor of the legislation, Sen. Jabo Waggoner, R-Vestavia Hills, the Senate sponsor of the legislation, and Dr. Mark Wilson, Jefferson County health officer. Photo courtesy of Jamie Martin/the Office of Governor Robert Bentley.

A bill that would enable more people to administer a life-saving drug to someone overdosing from heroin and other opiates is now law.

The bill became law when Bentley signed it, but it may take a while for its provisions to become reality.

“I think we have a lot of work ahead of ourselves,” Wilson said after the signing ceremony. “To be honest, a lot of effort was put into getting the bill passed and making sure that the wording was agreeable to different parties … so, you know, now we’ve got to kind of  get ourselves together and make sure we put it to good use.”

The law, originally sponsored by Treadaway and subsequently by Waggoner, was passed last week.  It authorizes a physician or dentist, “acting in good faith and exercising reasonable care,” to “directly or by standing order prescribe an opioid antagonist” to someone “at risk of experiencing an opiate-related overdose” or to “a family member, friend or other individual, including law enforcement, in a position to assist an individual at risk of experiencing an opiate-related overdose.”

The “opioid antagonist” mentioned in the bill is naloxone hydrochloride, a synthetic drug commonly known as narcan that can reverse the effects of an overdose of heroin or another opiate. At present, trained paramedics give a dose of naloxone to someone overdosing on heroin, hydrocodone or other opioid painkillers.

The law’s supporters say that in many areas of Alabama, law enforcement officers are often the first to arrive at an overdose scene, and that they can save lives by giving naloxone by injection or by nasal spray to overdose victims. The bill requires that the Alabama Department of Public Health approve a program that shows law enforcement officers how to properly administer naloxone no later than next Jan. 1.

Support for the measure came from relatives of heroin users, Birmingham Treatment Alternatives for Safer Communities and the Jefferson County Board of Health. Support for the legislation grew because of the growing number of deaths due to heroin or other opiates in Alabama.

According to the National Conference of State Legislatures, a majority of the states and the District of Columbia have passed laws or developed a pilot program to allow professional or lay people to administer “medication to reverse the effects of an opiate-related overdose.”

“Deaths caused by opioids are often preventable because it can take hours for an overdose to become lethal, time during which resuscitation is possible if medical attention is sought,” the NCSL states.

Under the new Alabama law, physicians or dentists or individuals who administer nalaxone to an overdosing person will be “immune from any civil or criminal liability … absent unreasonable, wanton, willful, or intentional conduct.”

In addition, someone under 21 years of age who calls law enforcement to get help for someone who is overdosing will not face prosecution for “the  possession or consumption of alcoholic beverages” if responding officers find those items in their possession. The law also states “an individual may not be prosecuted for a misdemeanor controlled substance offense if law enforcement became aware of the offense solely because the individual was seeking medical assistance for another individual.”