BIRMINGHAM – Authorities are looking for the public’s assistance in locating an armed robbery suspect. 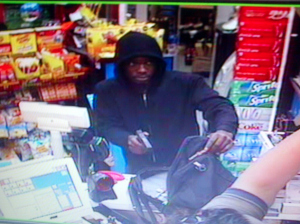 The man seen in the photo demanded money, cigarettes and cigars at a Chevron gas station on Montclair Road on Tuesday night. He initially entered the store as a means of shelter from the rain.

The suspect waited for other customers to clear out before pulling a gun on the clerk, 15 minutes after entering. After collecting the demanded items, he fled the scene.

Anyone holding information regarding the man in the photo or the robbery is asked to contact the Birmingham police or Crime Stoppers at (205) 254-7777.