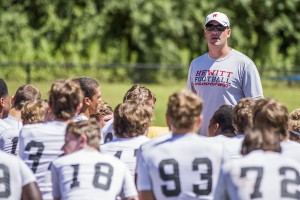 TRUSSVILLE – The construction of anything meant to last is not easy. It needs a good foundation.

That’s why Hewitt-Trussville head football coach, Josh Floyd, is hosting a camp this week. This camp will provide Floyd with a chance to help future Husky playmakers develop.

Floyd said he recognizes that the camp will not transform players overnight. Much of the focus will be on fundamentals that players can work on when they leave.

“You want to give them things they can take home with them and really try to get better [at over] the entire summer,” Floyd said. “It turns into a habit and they don’t have to think about it anymore.”

Although it’s the middle of the summer, campers will spend a portion of the camp in a classroom setting. Floyd said he likes to show videos of NFL players, like Peyton Manning, to illustrate the importance of good technique.

It’s one thing for me to say it, but when they see somebody at that level doing it the same way I think it means a lot to kids,” he said. “I think the mental side of it is stuff they can work on when they get home all summer.”

The camp gives out a lot of homework, but Floyd said he wants the kids to have fun as well. He said the camp will have plenty of competitions that the kids should enjoy.

Floyd said he expects a good turnout this year, but he hopes that this is just the beginning. The second-year Husky coach wants his camp to continue to grow in the future.

“We want to make it to where it’s a culture here. Where Hewitt-Trussville is known for guys who can throw and catch,” Floyd said. “Hewitt-Trussville has had a lot of big time quarterbacks over the years, and we just want to keep that tradition going and make it even better.”