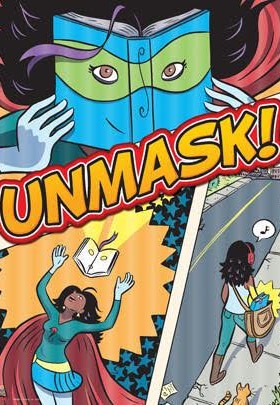 A new event at the Birmingham Public Library teaches children that not everything is what it seems. Photo from bplonline.org.

The Circle of Light is the first all-women led giving initiative established by the Birmingham Civil Rights Institute (BCRI). Circle of Light was created to provide funding to support BCRI’s exhibitions, shed light on a group of females who share a common goal, embrace the women in historic and contemporary fights for human rights and connect BCRI with more female supporters.

“History today would not be possible without the leadership, sacrifices, determination, and bloodshed of women,” stated Rhonda Ball Clark, BCRI Head of Development. “These courageous ‘SHEroes’ joined forces with various other leaders of the movement to ensure civil and human rights were afforded to all. Circle of Light aims to shine a positive light on the great civil rights work of these women.”

June 2015 marks the end of the group’s first year, and the initiative has raised half of its $100,000 dollar goal. “The overall goal of Circle of Light is to generate $300,000 over the next three years ($100,000 annually) through women supporters,” said Ann Huckstep, a member of BCRI’s board of directors and Circle of Light leadership team.  “The funds generated will assist BCRI’s Oral History Project in preserving and sharing the firsthand accounts of Birmingham activists.”

Circle of Light emphasizes that, while BCRI’s permanent exhibits present civil rights history, the current world would not exist without the sacrifices, bloodshed, determination and leadership of women. BCRI collects and shares the personal records of female Birmingham activists like Lola Hendricks, Lucinda Roby and Addine “Deenie” Drew through its oral history project. The initiative may have been created for women, but men can also donate to “honor the significant women in their lives.”

Southern Association of Colleges and Schools Commission on Colleges (SACSCOC) has granted Birmingham-Southern College (BSC) reaffirmation of accreditation until 2025, according to officials. The SACSCOC board made the decision at its meeting June 11 and announced it on SACSCOC’s website. Years after financial issues threatened the college, BSC faculty, staff, administration, students and board members were able to demonstrate the college’s financial and academic strength and met 80 SACSCOC standards with no negative findings.

“This could not have been accomplished without the hard work of all hands,” said General Charles C. Krulak, BSC’s outgoing president, who led the college through the reaffirmation process. “We are on the right track, and with our new president, I see a bright future for Birmingham-Southern,” he said.

The Gardens and The Zoo get a visit from the Mayor

“These improvements will enable the pedestrian connectivity in our neighborhood that we have long sought,” said Fred Spicer Jr., executive director of the Gardens.

The new additions to the road include: a new roundabout, bike paths, wider sidewalks, additional lighting, and a new entrance to the Zoo and to the Gardens with a goal of improving safety for visitors, traffic flow, and access to the two locations.

Walk with Me, Calvin W. Woods’ story on his life defending civil rights

An activist, pastor and president of the Birmingham Metro Southern Christian Leadership Conference (SCLC), Woods was active in Birmingham demonstrations with Fred Shuttlesworth. When Shuttlesworth’s organization, the Alabama Christian Movement for Human Rights’ (ACMHR) tried to desegregate Birmingham buses in 1956, Woods was apprehended and beaten. He was also arrested during the 1963 Birmingham Campaign, participated during the March on Washington for Jobs and Freedom later that year, and in 1965 active in the voting rights actions lead by Edward Gardner.

Still outspoken, Woods has raised his voice in public protest against violence as well as the Supreme Court decision that allowed parts of the Voting Rights Act of 1965 to be unenforced. Among other things, Woods is also a former member of the Birmingham Board of Education and BCRI’s board of directors and in 2014, he was honored with a historical marker at Kelly Ingram Park. For more information, call: 205-328-9696 x 215.

The Birmingham Public Library (BPL) is teaching teens that things are not always what they seem. On June 25, Avondale library will be hosting the Unmasked event “Adventures in the world of forensics” at 2 p.m. Unmasked is BPL’s summer camp series for teens and emphasizes presenting kids with what is not evident to the naked eye, including theater for character development, magic tricks for critical thinking, and forensics for unmasking the real criminals.  Dr. Beth Gardner, UAB professor of forensic science, will be leading the event as a volunteer. She will be teaching teenagers how to do a luminol test, which is how scientists test fabric for residues in solving crimes. Gardner also will show kids how to find fingerprints by dusting a piece of glass with powder.

“What I’m trying to do are some forensic exercises where what’s there isn’t immediately visible,” said Gardner. “You can look at something, and it doesn’t look like anything’s there. But with the proper test, the evidence becomes clear.” The event is free but registration and 24-hour notice of attendance is required. For more information, visit: bplonline.org or call 205-226-4003.

Want to beat the heat this summer? Your windows might be beating you. According to consumerenergycenter.com, 30 percent of the money spent on energy bills is being wasted. While many people may know shutting the blinds and curtains can help keep homes cooler, living in the dark isn’t the only solution. Specialists from Glass Doctor offered a few tips: