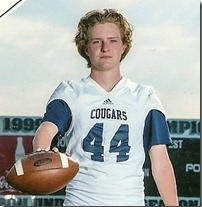 CLAY – The Clay-Chalkville football program is sending another player to the next level.

This time, the commitment comes from a guy that connected on the school’s longest made field goal. Patrick Millican, a 2014 graduate, made his verbal pledge to Maryville College in Tennessee on Tuesday.

Millican served as the kickoff specialist, punter and place kicker for the Class 6A state champions last season. He finished his senior year as a member of the Alabama High School Athletic Association All-State team. He also landed on the first annual All-Tribune Football Team.

According to reports, Millican accounted for 114 kicking points as a senior for the Cougars. His 45-yard make stands as the longest made field goal in Clay-Chalkville history.

Maryville has won the USA South Atlantic Conference the past two years. The school, which is one of the 50 oldest colleges in the country, is located near Knoxville, Tenn.