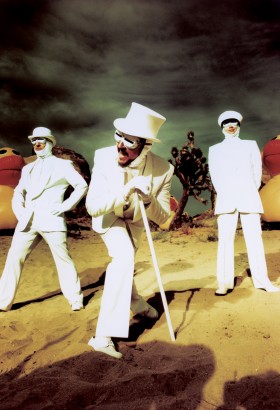 Over the course of their three-decade career, Primus have established a reputation as the bizarre uncles of experimental rock. The band’s unconventional aesthetic — a sideshow-barker theatricality bordering on novelty, balanced with innovative musicianship and an aggressive irreverence for the confines of any genre —has resulted in an entirely singular career.

It’s a career in which albums with titles like Sailing the Seas of Cheese and Pork Soda can not only exist but be hits, spawning classic alternative singles such as “Jerry Was a Racecar Driver” and “My Name Is Mud,” and in which the band’s most widely heard tune can be the whacked-out anarchy of the South Park theme song.

The album recasts frontman Les Claypool as the iconic Wonka, and as almost every other character with a singing role. The result is a rendition that pushes the nightmarishness that bubbled under the surface of the original to the forefront. Even “Candy Man,” arguably the film’s most straightforwardly happy song, is transformed via twitchy guitar work and the strangely percussive lowing of a cow, into something that sounds like it just crawled forth from the film’s disturbing tunnel sequence.

“The idea was to take on this sacred thing,” says guitarist Larry “Ler” LaLonde. LaLonde, who has been with the band since 1989, says that Claypool had been entertaining the idea of a Willy Wonka cover “for a while” — Claypool told Rolling Stone that he had been “obsessed” with the film as a youth —before eventually deciding to tackle the project as the theme for the band’s annual New Year’s show in San Francisco.

“It turned out that we put a lot of energy into [the show], more than we thought we were going to,” LaLonde says. “By the time we got to the end of learning it all, we were like, ‘Whoa, maybe we should record this thing.’”

“From my end of it, I wrote everything out and figured out all the little parts, and I think everybody else did a version of that,” LaLonde says. “Then we all got together and started chipping away at it. Not necessarily using those parts [we had written], we would come up with grooves and incorporate the melodies. There was a lot of just chipping away and building back up. In the end, I was pretty pleasantly surprised, because at first I didn’t know how we were going to do it.”

The album even features a first for LaLonde — he takes up lead vocals for the song “I Want It Now,” originally sung by spoiled British pre-teen Veruca Salt in the film. LaLonde admits he’s still not quite sure how his vocal debut came about.

“It was just that it was such a different vocal part,” he laughs. “I think it was mostly just to make me uncomfortable. At first, I was like, ‘Definitely, nobody wants to hear me sing.’ And I still have that feeling to this day.”

It’s the band’s constant willingness to grow and experiment that’s responsible for its longevity. It’s also helped the band to adapt to several significant personnel changes; throughout the band’s lengthy career, Claypool and LaLonde have seen the position of drummer remain almost entirely in flux, most usually cycling between Jay Lane, Tim “Herb” Alexander and Bryan “Brain” Mantia (Alexander handled drumming duties for Primus and the Chocolate Factory).

“It’s bizarre the way everyone’s come and gone,” LaLonde says. “It definitely changes the dynamic. They’re all so different, but they’re also some of the best drummers I know. Each one of those guys has their own feeling, [but] no one has more of the signature drum [sound] that we’ve had than Tim. It just happened that Jay couldn’t make the last tour we were having of Australia, and Tim said he wanted to do it. He rolled back in. It was kind of like riding a bike. I don’t know anybody else who could have come up with that much inventive drum stuff [for the Chocolate Factory project].”

Despite the appropriateness of SlossFest’s industrial venue, it’s not clear whether or not Primus will delve fully into the Chocolate Factory with their appearance at the festival. “This tour’s kind of crazy,” he laughs. “I know there’s one festival where we’re just doing [Wonka].”

In any case, Primus plan to wrap up their trip into Wonka’s factory up with their upcoming fall tour. “We’ve pretty much taken it everywhere we can at this point,” says LaLonde.

The band isn’t yet working on a new album — “maybe subconsciously we have,” LaLonde speculates — and they seem comfortable taking their time. “Hopefully it’s in the back of everyone’s minds to do something like that,” he adds.

LaLonde, for one, is in it for the long haul; he’s been with the band since he was 19 years old. “Some of the gigs at first, I wasn’t old enough to be in the buildings so I had to play from outside,” he recalls.

After effectively founding the death metal genre at the age of 15 with his band Possessed, he met Claypool when both were members of the Bay Area band Blind Illusion.

“We became friends pretty fast there,” he says. “He had Primus going already, and their guitar player was quitting the band to have a real life instead of just driving around in a van like an idiot. So Les called me up.”

His career with Primus, he says, came “at the perfect time.”

“It’s kept me from having to do anything other than play music,” he laughs. “I was really getting into Zappa and King Crimson [at the time], trying to find the most weird and bizarre music I could find. When I got the chance to be in Primus, it was exactly what I wanted to do.”

“I didn’t care about being in a big band,” LaLonde says. “I wanted to be in a cool band and play crazy music.”