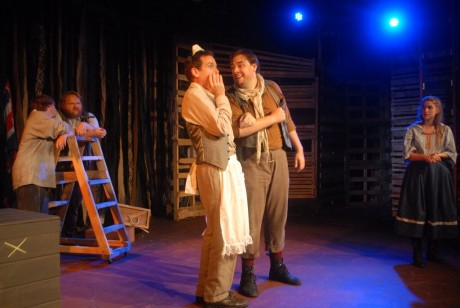 ‘Peter and the Starcatcher’ sets sail for Birmingham

“Be a woman!” exclaimed Molly Aster, played by actress Jessica Smith, when she or anyone else needed a little extra courage. And that’s exactly what Peter, actor Seth Burgess’s character, needed to soar.

After a year-long hiatus, City Equity Theater opens the season with its 19th show Peter and the Starcatcher, a five-time Tony Award winning musical based on the book by Dave Barry and Ridley Pearson. It’s the comedic origin story of the boy who didn’t want to grow up and a pirate captain with a “hook in his future.”

“It is quite a departure from the style of material [CET has] chosen from the past. It is very complex, and it is constructed like a musical,” said Michael Flowers, director and professor of theater at Birmingham-Southern College. “I think people will be surprised by the way the story is told. It’s not about multimillion dollar sets and special effects. It’s about 12 actors and a few props telling a story….I’m not aware of any other play like it out there right now.”

Peter and the Starcatcher is one of CET’s largest productions, with 12 actors performing in the theater’s intimate space. The production is in the style of poor theater, according to Flowers. A few objects, such as a couple of pieces of rope, a ladder, crates, transform throughout the two hour show and become anything and everything.

“I saw the Broadway production and knew it was something that I was dying to do because it was so much fun,” Jonathan Fuller, CET vice president and professor of theater at the Alabama School of Fine Arts. “It really embraces the artifice of theatricality. And the artificialness of it, of taking props and making it work. It’s very creative, and it’s very fun. It’s got a very adult sensibility [but is] perfect to bring the whole family to.”

The show bobs and weaves in and out of scenes with narration from the actors, placing the audience in a new setting, then starts right back into the story without a stutter. Right back to Peter, Molly and Black Stache.

Fuller plays Black Stache, a wannabe pirate captain and the show’s villain. Stache is known for the abundance of whiskers just under his nose and his hatred for children. However, once upon a time, Fuller had played Peter — the boy who didn’t want to grow up —  a role which solidified his love of theater forever. “I’ve played the ultimate hero, now I get to play his ultimate villain,” he said.

“[Black] Stache’s real arc, what he wants is to find his counterpart. Like a perfect hero,” said Fuller. “So, he finds that ultimately in Peter. He’s now the complete villain because he has a complete hero.”

At the beginning of the show, the ultimate hero, Peter, is just an orphan boy without a name. He hates grown-ups and isn’t much to talk to either.

“He’s the quiet kid who has a lot more going on in his head than people give him credit for,” said Burgess, a UAB theater student and actor. “His need to be relevant, to do something important, and to have an identity is something that I think is universal in all of us. His life is as bad as it could possibly get at the start of the play, and when he finds just a glimpse of hope through Molly, there’s a spark [that] I believe ignites in him to use that pain as motivation to do something real and impactful in the world.”

“She’s smart as a whip. She’s really physically fit. She’s a very strong, opinionated leader… Molly can run faster, swim better and speak Norwegian,” said Smith. “She can do all these ridiculous things you don’t expect a girl to be able to do.”

During a time when women were seen and not heard, Molly is everything a woman shouldn’t be in Victorian England. “She’s like ‘Be a woman’ in the way people would say ‘Man up,’” said Smith.

But Molly is also an apprentice starcatcher, a person who safeguards the magical, and powerful, star-stuff that even has the ability to turn scallops into mermaids. During the play, Molly and Peter fight to keep the star-stuff out of the pirates’ reach.

“I knew Birmingham would really like this a lot,” said Fuller. “It speaks to imagination, courage, seeking a home, seeking your place in the world. And it’s a play with a lot of heart to it.”

Peter and the Starcatcher opened Thursday, July 23 and runs through Sunday, Aug. 16 at Birmingham Festival Theatre. Performance are at 8 p.m. Wednesday-Sunday with matinee performances on Sundays at 2:30 p.m. For more information or to purchase tickets, visit: cityequitytheater.org or call 205-500-2701.