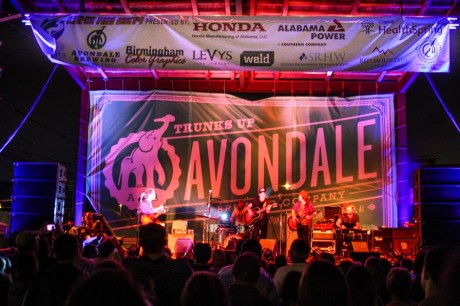 Fresh music for a better environment

For the past seven years the Freshwater Land Trust has been taking aim at the feet of young Birminghamians in an effort to turn them into conservationists through its signature event, Land Aid. Land Aid 2015, featuring the band Kopecky, will be held July 31 at Avondale Brewery.

As the event approached, members of the nonprofit shared how the event began, what it’s accomplished so far, and what they hope Land Aid can be.  Comments come from, in no particular order, FWLT Executive Director Wendy Jackson, Director of Philanthropy Bryding Adams, Land Steward Zac Napier, Communication Coordinator Memorie English, and Junior Board Member Mary Elizabeth Roberson.

Weld: How did Land Aid start?

Mary Elizabeth Roberson: Land Aid has been The Freshwater Land Trust Junior Board’s signature event initiative for the past seven years. In an effort to cultivate the next generation of conservationists, the Junior Board launched Land Aid as a way to educate young professionals about what the FWLT does through a fun, engaging event.

Land Aid started seven years ago and has grown from the back patio at Parkside to the large stage at Avondale Brewery, a testament to Land Aid’s success year after year. Land Aid has featured bands in the past like nationally well-known St. Paul and The Broken Bones and The Wild Feathers, and continues to attract quality acts like this year’s headlining band, Kopecky.

Weld: How does Land Aid help preserve “places that matter?”

Wendy Jackson: All proceeds from Land Aid help the Freshwater Land Trust advance our mission to conserve land that enhances the water quality of our rivers and streams and provide recreational opportunities for the communities we serve. Support from Land Aid will help us move forward on several projects, including the building of the Red Rock Ridge & Valley Trail System, the Tapawingo Springs restoration plan, stream bank restoration at our Turkey Creek dam removal site, and several other pending land acquisition projects.

Weld: How much has Land Aid raised in the past?

Bryding Adams: This is our seventh annual event, and Land Aid has continued to grow with each passing year. Last year, we raised almost $8,000—and it was a rainy evening! This year, we’re hoping to exceed $10,000, which will directly impact our work on the ground.

Weld: What specifically has Freshwater purchased with proceeds from Land Aid in previous years?

Zac Napier: Proceeds from Land Aid 2013 and 2014 were used for our Turkey Creek dam removal project. In 2013, with the help of several of its corporate partners, the Freshwater Land Trust successfully removed Old Shadow Lake Dam on Turkey Creek near Pinson.

Not only was this dilapidated and failing dam removed, but the project also opened up an additional half mile of habitat for the endangered vermilion darter – a fish native to the Birmingham area that before this project only had about 7 miles of habitat in the entire world. This project could not have happened without the time our staff put into carefully removing this dangerous structure.

Once the dam was removed, the Freshwater Land Trust continued with the restoration phase of the site. Thanks to our partners and additional funding from Land Aid, FWLT was able to purchase native trees and shrubs to stabilize the fragile bank.

Weld: How does Land Aid fit into the overall fund raising effort? What other ways does Freshwater raise money and how can people contribute (money, time, etc)?

We also would not be able to do the work that we do without our dedicated and passionate individual supporters. We are incredibly grateful for each of our partners, supporters and friends who commit their hearts to conservation. Without them, we wouldn’t be able to accomplish all that we have over the past 19 years—they are the true champions for conservation.

Donors can help us preserve the places that matter by donating online at www.freshwaterlandtrust.org or by check. We’re a small shop, and sometimes we need big help, so to volunteer your time to help with our day-to-day operations or stewardship needs, call us!

Weld: How does Land Aid 2015 differ from previous years?

Memorie English: This year’s event will feature music from Nashville-based Kopecky as well as Birmingham’s B.Snipes band. In addition, this year we have brewed two Avondale beers crafted exclusively for Land Aid: Red Rock IPA and a Freshwater Honeysuckle Saison. These were brewed by the Land Trust’s junior board, governing board and staff for this event.