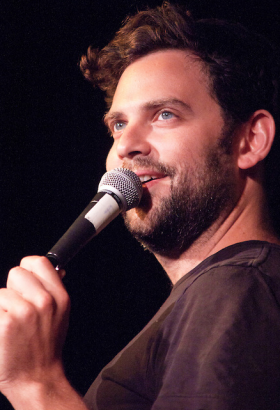 “I’ve actually been on this mission to go and do non-comedy club venues in most areas of the country,” Barry Rothbart said Sunday evening ahead of his performance at The Syndicate Lounge on Aug. 3.

According to Rothbart and other comedians running the underground performance circuit, more intimate settings bring the conversation of the comedy to the people. As it was meant to be, says Rothbart.

He compared America’s comedy renaissance to the garage-birth of the ’80s and ’90s grunge rock scene and then fledgling music festival Lollapalooza. DIY is back, and comedians it seems have taken control back from the suits that have been at the helm of comedy clubs in recent decades — comics Tim Allen, Jerry Seinfeld and Ray Romano.

“I think that when you do these smaller venues, there’s almost this feeling that you can be more subversive because they feel like counter-culture,” Rothbart said. “Like, it feels like you’re kind of changing the game.”

“Something about the comedy club setting almost makes the comic seem like, ‘I’m this entity that’s better than all of you guys and you’re all here to see my greatness,’” Rothbart continued with a chuckle. “But you go into a bar, and you’re all just complaining about stuff together. That’s what it feels like.”

Rothbart has already established himself as one of the top comedians in the country. From a viral Buzzfeed video about joining the one percent to a break-out role in The Wolf of Wall Street, he is a proven talent with additional aptitude for producing, writing and directing (his competitive eating documentary Hungry is internationally acclaimed). He was named one of Variety’s Top Ten Comics to Watch, filmed a Comedy Central Special and has appeared on Conan, The Tonight Show, The Late Late Show, @midnight, Adam Devine’s House Party, College Humor Originals, Comedy Central’s 300 Sunnyside and MTV’s Punk’d.

Mary Poppins — Dorothy Jemison Day Theater. 800 19th St. N. The Banks children need a new nanny. Enter: Mary Poppins, an inspiring, magical sitter with an unlimited imagination for fun and problem solving. The charming, musical has won audiences since its debut. Mary Poppins will be available for pictures before every Saturday matinee from 12:30-1:30 p.m. Tuesday–Saturday 7:30 p.m. Saturday and Sunday 2 p.m. Through Aug. 2. For more information, call (205) 490-2345.

Acoustic Americana — Continental Bakery Downtown. 1820 Fourth Ave. N. Estee Borrello and Matt Waldrep, aka Cover Me Up, will be performing acoustic folk tunes this Friday at the Continental Bakery Downtown. From Josh Ritter to Johnny Cash, the Secret Sisters and Justin Townes Earle the show should make for a more relaxing kick-off to the weekend with Continental’s drink specials from 5 to 7. 7–9:30 p.m. Free. For more information, visit chezlulu.us.

A Night of Big Stars — The Florentine Building. 2101 Second Ave. N. Benefitting Big Brothers Big Sisters of Greater Birmingham, 15 “littles” have auditioned and pooled their talent to perform dance, singing, music, spoken word and drama pieces with some of the Big Brothers and Big Sisters of Greater Birmingham who have strengths in performing arts. 6–9 p.m. $150. For more information, visit anightofbigstars.com.

Willie Perry Day — Old Car Heaven. 3501 First Ave. S. This event will honor the life and legacy of Birmingham’s own super hero Willie Perry, the Batman of Birmingham, and will formally announce the fundraising campaign Rescue The Rescue Ship and the feature documentary Lee Shook Jr. and associates are making about Cole’s life and the car’s restoration (tentatively titled Smiles Per Gallon). Cole’s surviving family members will be presented with the recently passed joint resolution from the Alabama State Legislature honoring Cole’s contributions to Birmingham. The Rescue Ship will be parked during the event and a screening of the “That’s Incredible” footage starring Cole will take place. 6 p.m. For more information, email theaudiovore77@gmail.com.

Sordid Lives — Terrific New Theatre. 2821 Second Ave. S. Del Shores’ original comedy comes to life on stage courtesy of the Terrific New Theatre Players. Ingram family matriarch Peggy has passed on, but her funeral brings out the best and worst in her neighbors and loved ones across three generations. Thursday–Saturday at 8 p.m. and Sunday at 2 p.m. Through Aug. 15. $25. For more information, visit terrificnewtheatre.com.

She Kills Monsters — Theatre Downtown. 2410 Fifth Ave. S. Game night just got real. When Agnes Evans opens her deceased sister’s Dungeons and Dragons manual she is thrust into an epic journey toward self-reliance pitted against homicidal fairies, gnarly ogres and, of course, dragons. Thursdays through Saturdays at 8 p.m. Through Aug. 15. $17. For more information, visit theatredowntown.org.

Shrek The Musical — Virginia Samford Theatre. 1116 26th St. S. The Virginia Samford Theatre STARS (Students Take a Role at the Samford) present the Disney smash-hit, Shrek, about an ogre tasked with rescuing a damsel not so in distress. Fairy tales are flipped on their head in Pulitzer Prize-winning playwright David Lindsay-Abaire and Tony Award nominee Jeanine Tesori’s Shrek. Thursday through Saturday at 7:30 p.m. Saturday and Sunday at 2:30 p.m. Through August 8. $25. For more information, visit virginiasamfordtheatre.org.