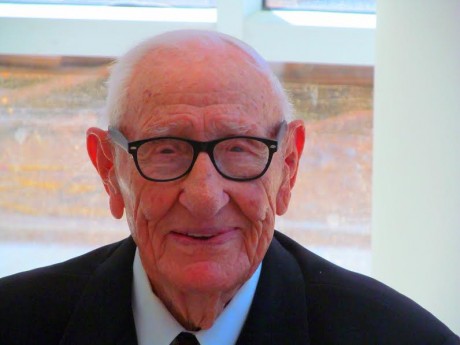 Veteran Carl Cooper, 95, now takes a shuttle to the downtown VA Medical Center after parking in a deck at 4th Avenue North and 22nd Street. If he needs treatment that he can get at the new Birmingham VA Clinic, he will be able to park in its eight-story parking deck. The new clinic is scheduled to open in mid-December. Photo by Tom Gordon.

It’s been common in recent years to see groups of veterans standing or seated underneath an awning outside a city parking deck at the corner of Fourth Avenue North and 22nd Street, waiting for shuttles to take them to the VA Medical Center for treatment that might include X-rays, physical therapy, mental health counseling and hearing exams. Shuttles at two other city decks take medical center employees to and from the big hospital.

For what it is, the system works, but by mid-December far fewer people will need it. On a site four blocks east of the VA Medical Center’s cramped, parking-challenged location on 19th Street and Seventh Avenue South, the VA is expected to open a 50,500-square foot outpatient clinic with an attached eight-story parking garage with space for 2,334 vehicles.

The Birmingham VA Clinic will mainly provide primary care and will offer some specialized treatment services.

Medical Center officials, representatives of BL Harbert International (the prime contractor on the clinic project) and three vets who expect to use the clinic met with reporters Aug. 4 to tout the assets of the new facility. One of those assets is the convenience and easier access it will provide its patients.

Another, according to the VA Medical Center’s acting director, is lessening “the pressure on the main facility” by freeing up more room there for specialized care such as dialysis and the cancer treatment program, and by providing more treatment space, including some for mammograms, for the growing number of patients who are female vets.

“The space that (women’s health facilities) are in is, actually I don’t think it’s as big as this area here,” Dr. Bill Harper said. He spoke from a Harbert trailer office across from the fenced-off new clinic along Seventh Avenue South. “They’ve really been squeezed and been limited in what they could do by the space. They’re going to have a really nice space here, a lot more rooms, more exam rooms, more efficiently laid out …

“We’re also going to have X-ray facilities here and we’ll be able to do mammography for the first time. We’ve not had mammograms in the Birmingham facility until now.”

X-ray room. Scott Walling, assistant superintendent for BL Harbert International for the project to build the new Birmingham VA Clinic, outside an X-ray room in the not-yet-completed facility. The new clinic, which will ease pressure on the main downtown VA Medical Center, is slated to open in mid-December. Photo by Tom Gordon.

The new three-story clinic also will offer space for outpatient physical and occupational therapy, more space for treating mental health and hearing disorders, and it will have a pharmacy “so that people won’t have to go the main facility to get their routine medicines,” Harper said.

Vans will be available to take patients to the main facility if they need to go there, he added.

So far, “There’s been nothing out of the ordinary,” said Scott Walling, assistant project superintendent for BL Harbert.

The project involves Harbert, Las Vegas-based Molasky Group and Birmingham-based Graham and Company, which owns the clinic property. The VA Medical Center has a 20-year lease with Graham and will pay the company more than $4.3 million annually.

Dr. Bill Harper, acting director of the Birmingham VA Medical Center, speaks at a press conference ain the atrium of the not-yet-complete Birmingham VA Clinic. The three-story, 50,500-square-foot outpatient clinic is scheduled to open in mid-December, and will ease pressure on the main medical center a few blocks to the east. Photo by Tom Gordon.

“With the exception of the mammography, we’re not really adding anything we haven’t been doing already,” Harper said. “We are doing it in a space that’s going to be more conducive to efficiency and access, especially in the women’s health program.”

That overall clinic space also will include more primary care examining rooms to allow a patient to be prepped in one while the doctor is examining another patient in the other.

At a subsequent news conference in the atrium of the new clinic, three veterans now using the VA Medical Center said they looked forward to what the new clinic would do for them and their fellow vets.

Veteran Flora Miles looks forward to convenient parking and one-stop shopping health care at the new Birmingham VA Clinic, which is slated to open in mid-December. Photo by Tom Gordon.

One of the three, Flora Miles of Center Point, who served with the Alabama Army National Guard’s 109th Evacuation Hospital in Saudi Arabia during the 1991 Gulf War, said the clinic would be like “a one-stop shop” for her. “Right now, I have to go somewhere else to get a mammogram (and) several other procedures they send you out to do, but everything should be done in one place,” she said.

Miles added that parking at the clinic should not be the concern for her that it is when she has an appointment at the main medical center. Most of the time she parks on the street, and is out before the time runs out on the meter. But there have been times when she has been inside longer than she expected and then she has worried that a meter attendant will come by to find the time on the meter has expired.

“So this (clinic parking) is going to be awesome,” she said.

The prospect of using the clinic parking deck also appealed to former Marine Carl Cooper. The 95-year-old Birmingham area resident currently takes the shuttle to the main hospital after parking in the deck at 22nd Street and Fourth Avenue North.