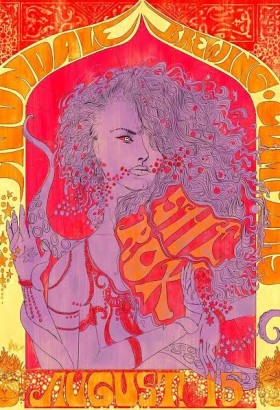 A new kind of music festival will descend upon Birmingham on Saturday, Aug. 15. SheRox, Bham is a female-led multi-band rock concert in support of The WellHouse and victims of human trafficking.

The WellHouse is a locally owned nonprofit that provides a haven for women of all ages who have been trafficked. Human trafficking was specifically criminalized in Alabama in 2010 with House Bill 432, but laws protecting victims are still in the works.

According to executive director of The WellHouse Tajuan McCarty, law enforcement often prosecutes women sold into prostitution as opposed to the pimps or men who purchase sex.

Partnering with Downtown Music Works, SheRox, Bham aims to send a loud, supportive message to women who have been sold into sexual slavery.

Headlining the event is Tennessee-based band The Acorn People. Self-described as blues punk rock, the band is fronted by Grace Jermusyk, who adds gut-busting vocals reminiscent of Pat Benatar (try their 2014 single “Seventeen”) and also plays rhythm guitar. Their sound has just enough twang to hearken back to their roots, thanks to lead guitarist Kris Cagel, according to Downtown Music Works, who wanted to infuse touches of Southern nostalgia without categorizing the band as pure country. The effect is powerful and fitting for an event that so strongly promotes female empowerment and solidarity.

“Mandi Rae … is one of the young performers who is poised to take back country music from the over commercialized grip of the Nashville establishment and give us a genuine taste of the sincere, straightforward narrative and powerful voices of the real south,” wrote Robin Merrit in artFRONT.

SheRox, Bham 2015 will take place at Avondale Brewing Company on Aug. 15, from 3 to 11 p.m. Tickets are $5. For more information, visit downtownmusicworks.com.

Sordid Lives — Terrific New Theatre. 2821 Second Ave. S. Del Shores’ original comedy comes to life on stage courtesy of the Terrific New Theatre Players. Ingram family matriarch Peggy has passed on, but her funeral brings out the best and worst in her neighbors and loved ones across three generations. Thursday–Saturday at 8 p.m. and Sunday at 2 p.m. Closing Aug. 15. $25. For more information, visit terrificnewtheatre.com.

Alabama Theatre Summer Film Series — Alabama Theatre. 1817 Third Avenue N. Every Friday and Sunday from June through August, the Showplace of the South will screen a different audience-favorite. This week, see Grease on Friday and The Sound of Music on Sunday. Fridays at 7 p.m. and Sundays at 2 p.m. $8. For the summer’s full lineup, visit alabamatheatre.com.

Tutwiler — The Carver Theatre. 1631 Fourth Ave. N. This independent short film based on a true story will be screening at the Carver Theatre this weekend. Shay attempts to reconnect with her mother who gave birth to her 20 years earlier in Tutwiler prison. 7 p.m. $10. For more information, call (205) 327-9424.