CLAY – Records were broken, championships were won and senior wide receiver T.J. Simmons doesn’t see why the 2015 version of Clay-Chalkville’s offense can’t be even sharper this time around. 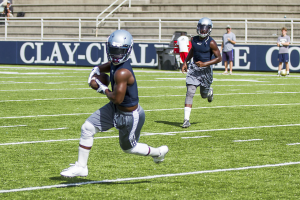 “I think we can be better,“ said Simmons, who verbally pledged to Alabama following a stellar junior campaign. “We’ve got some new playmakers that will show up this year. We’ve got a new transfer from Pinson, Desmond Williams, I think is going to be a great asset to the receiving corps.”

Cougars’ head man Jerry Hood doesn’t foresee this coming season with quite as much optimism. When asked if this year’s offense could be better than last year’s, Hood had this to say: “Well, so far we haven’t been. It’s going to be more difficult. We wont average 48 points a game. I don’t believe they have the ability to do it, because the defenses will be so in tune with stopping our offense.”

“The challenge this year is so much more than we’ve ever had at Clay, because you’re the champion. Do they have the ability? Yes. But it’s all about proving it on the field,” Hood said at the Jefferson-Shelby high school football media days.

Three of the Cougars brightest stars return as integral weapons in the passing game. The returning Class 6A Back of the Year, Ty Pigrome, will be taking snaps with Simmons split to one side and four-star pass catcher Nico Collins flanked to the other.

Those three are sure to make Friday nights at Cougar Stadium fun for any advocate of the passing game, but make no mistake; Clay-Chalkville made its loudest statements on the ground last fall, and don’t expect that down-hill running game to go missing in 2015.

Hood would like to see his offense operate with a balanced attack, capable of handling any situation it’s presented with.

“It really just depends on what people are doing to us. If they’ve got eight or nine in the box, then obviously we’re going to throw it around,” Hood said. “If they get out of the box, we’re going to run it a lot.

“We’re pretty much a mutt. We just do what we need to do to win the game.”