CLAY – Clay-Chalkville needed a late score to reclaim the lead and end last season with a win. Minutes later, the Cougars were undefeated Class 6A state champions and the unforgettable season came to its memorable conclusion – and therein lies the problem.

As great as last season was for the Cougars, wallowing in previous success could derail the program this year. A little amnesia might do the team some good. 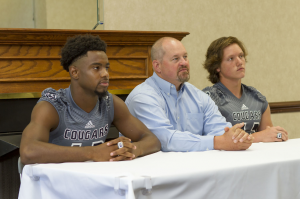 Of course, the seemingly regular division one offers might make it more difficult to forget last season’s accomplishments. Junior receiver Nico Collins has already gotten serious attention from eight SEC schools, and coach Jerry Hood said that a handful of other players have serious offers to play football at the next level as well.

“We now have to talk about that (the commitment process) a lot at Clay, which is a good thing,” Hood said.

Senior wide receiver T.J. Simmons said the recruiting process does not interfere with his obligations to the team.

“I try not to let it distract me at all. I’m at practice with the team. I’m trying to focus on the team,” Simmons said. I’ve already committed (to Alabama) so I’m just trying to stop the recruiting process.”

Simmons might have put the sometimes sleepless recruiting process behind him, but others, including senior quarterback Ty Pigrome, remain uncommitted. The national attention these athletes receive now might seem harmless, but the recruiting process will only ramp up as the season progresses.

The expectations for Clay-Chalkville this year are deservedly high, but the team hasn’t played a meaningful snap yet. Hood said he recognizes the potential pitfalls that await his team as the Cougars prepare to start the season.

“I think they have a great challenge…it’s going to be more difficult,” Hood said. “It’s all about proving it on the field.”

In 15 games last season, Clay-Chalkville scored over 700 total points to average just shy of 49 points per game. It’s fair to say that level of success did not go unnoticed.

Simmons, a key contributor to that point total, said the offense can be even better next season. Better might be exactly what Clay-Chalkville needs, because Simmons said that none of the Cougars’ opponents are likely to overlook the offense again this year.

“They know what we can do. They know who can produce on offense,” Simmons said. “We gotta play our best game against everybody, because everybody’s going to be giving us their best game.”

If Clay-Chalkville’s offense, which is led by Simmons, Collins and Pigrome can take the next step, then there might not be a defense in the state this side of Saturday that can keep up with the Cougars. Hood said he believes his team will be able to reach their potential, but he won’t be certain until the season starts.

“Sixteen through 18-year-old kids, if their girlfriend dumps them one day they might miss a beat. You just never know, but I don’t expect us to fall off,” Hood said. “(We want to be) a better team today than we were yesterday and they understand this.”