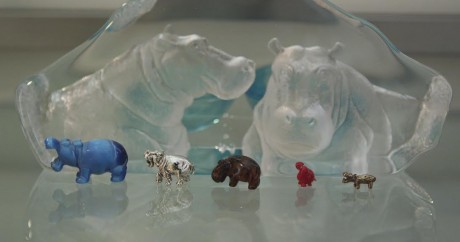 Still from The Pursuit of Hippo-ness courtesy of Alan Franks.

It all began with some porcelain dishes. Documentarian and University of Alabama at Birmingham professor Alan Franks first encountered the dinner service at the Birmingham Museum of Art in 2013. What caught his eye about this particular set was what was painted on it: hippopotami.

“Initially I was just going to do a really short film about this weird collection,” Franks said. “It is such a bizarre collection that has such a fine medium — it’s really high-end porcelain — and has an animal like the hippopotamus painted on it.”

“He started talking about the hippo society, and it all went from there,” Franks said.

Franks’ short documentary that he said he never intended on making, The Pursuit of Hippo-ness can been seen at Sidewalk on Saturday, Aug. 29 at the Alabama School of Fine Arts as part of Alabama Documentary Shorts.

The Hippolotofus is a small group of individuals from all over the world who share what Franks calls a “contagious passion” for the rotund creature. The society meets annually for a convention, but because the group is so small (about 50 people attend the reunion each year) members prefer to call the yearly get-together a reunion.

“I traveled all across the country to interview these people and it actually all started in Birmingham,” said Franks, who attended the Hippolotofus reunion in Branson, Missouri.

The more Franks interviewed the hippopotamus enthusiasts, the stranger and more passionate the subjects became. The filmmaker revealed that the footage takes up almost eight terabytes of hard drive space, and that in trimming the footage for the short he decided to release an hour-long version of the same documentary next year.

“There are so many other bizarre stories surrounding the hippo that I’ve covered and the short just really scratches the surface,” Franks said.

“There is so much stuff in this film that I could never even dream of writing because it’s just so perfectly weird,” he continued.

While Franks does not share the Hippolotofus’ adoration of the hippo, he is committed to portraying the people he documented as accurately as possible.

“They’re really the heart of the film,” Franks said. “It’s always the people that draw me toward documentary.”

Still from The Pursuit of Hippo-ness courtesy of Alan Franks.

Other Alabama Docs to See at Sidewalk