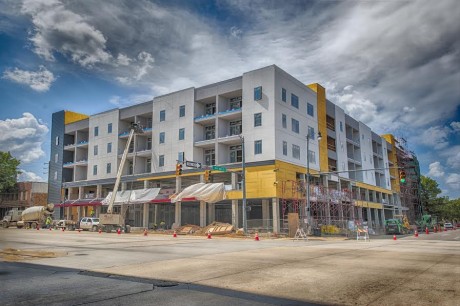 Twice a month, the city of Birmingham’s Design Review Committee convenes at the Auburn Urban Studio to discuss plans to make alterations to structures that fall within one of the city’s many historic and commercial revitalization districts. This column summarizes recent DRC activity, with projects grouped by type and location. This edition of Design Review recaps the DRC meeting from August 12, 2015.

A new project was presented for the former Federal Reserve Building (1801 Fifth Avenue North). The first phase of the renovation will be a core/shell renovation. The plan is to return the exterior to the original façade as it is a National Park Service tax credit project. The windows will be refurbished and previously removed windows will be replaced. The annex windows will also be replaced. An entrance with awning will be added to the annex building and the plaza renovation will resemble Zoe’s. The interior demolition is underway and the exterior renovation will start in October. A request was made for a façade drawing and sample materials.

Status:  Carried over, three against

The owner of a newly constructed parking lot (3122 Sixth Avenue South) came before the committee to have a project retroactively approved. The finished project does not meet the five percent landscape requirement. The owner does not have a landscape or fence plan, but will have one completed before the next meeting. The committee felt that a consultation by the city attorney would give the members some instruction on oversight with other departments.

The upcoming Chipotle Grill (300 20th Street South) is making plans for outdoor dining. There will be tables and chairs along 20th Street. In addition, opaque spandrel glass will be installed along one side of the storefront to hide the kitchen area.

The Holy Trinity Holy Cross Church (307 19th Street South) parking lot project returned with changes to the previously approved plans. The two buildings have been torn down, but the landscaping and location of the lot entrance has changed.

REV Birmingham presented plans for the Cycle Café (5530 First Avenue South). The new café will be in the 55th Place Arts building. The exterior will change from blue to white. The existing wood windows will change to steel casement windows and the wood door will be replaced with a steel door. A back-lit steel sign will be installed above the door.

Temporary vinyl signage will be installed on the corner of the 2 North 20th building (2 20th Street North). The signage will serve as a visual camouflage for the interior renovations. The vinyl is perforated in a way that those inside can see out but those outside cannot see in. The plan as presented includes a phone number, which will be removed per the committee.

The signage for Venue at the Ballpark (200 16th Street South) was presented to the committee. There will be three sets of channel letters on the south, north, and west elevations. The letters will be mounted on a standard raceway and will be backlit. Another sign will denote the leasing office, which will be channel letters installed on the fixed canopy.

A new residence will be constructed on a vacant lot adjacent to Cobb Lane (1916 14th Avenue South). The new home will be two stories and include gray brick, cedar shake siding, and metal clad wood windows. A garage will be accessible from Cobb Lane.

Plans for a residential greenhouse (3500 Norwood Boulevard) were approved by the neighborhood committee. The neighborhood’s concern centered around the roof, as it is the main portion of the structure visible from the street. The greenhouse will be behind the residence and off the alley and will include recycled wood-cased and glazed glass storefront windows.

The neighborhood committee denied a front yard chain link fence (3528 Norwood Boulevard). Guidelines in the neighborhood do not allow chain link fencing in front yards. The project was previously denied, but the homeowner came before the committee because he believed a neighbor’s similar fence had been approved. However, the neighbor’s fence has been cited and is currently in the hands of code enforcement.

The Redmont neighborhood recently approved a screen porch addition (2615 Aberdeen Road). The porch roof will extend the back gable and the addition will have a minimal sightline from the street as it is screened by existing trees.

Plans for a carport addition (2500 Aberdeen Road) were presented to the committee. The neighborhood approved with the stipulations that all exposed wood be painted bronze and the metal roof be installed in a bronze color.

A residential project to paint the front façade a charcoal color (2429 Second Avenue North) was returned to the committee by the homeowner. The charcoal was approved, but the owner would prefer to paint the façade white to cover the existing bricks. Committee members wanted to have the opportunity to look at the building before voting.