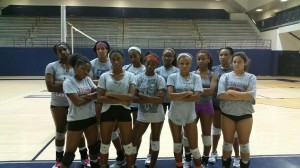 CLAY – Under the direction of head coach Natasha Brown, the Clay-Chalkville volleyball team has its sights set on defending the Class 6A, Area 12 championship this year, and it all starts tonight at Pinson Valley.

Brown and her 11-girl roster will get the season started in Mike Dutton Gymnasium for a crucial area test with the Indians. The varsity match is scheduled to start at 6 p.m.

“I am super excited about this season, and I know these girls are going to do some great things,” Brown said.

Those girls bring with them a wealth of experience, coming off a 27-17 finish last fall. Clay-Chalkville went unbeaten through Area 12 play on its way to a 2014 Jefferson County Championship.

The roster could look to Hitchcock, a Stoney Brook verbal, to lead another championship push this time around. Like many other programs across the state, the Cougars will play a home-and-home series with all of its Area 12 opponents.

After tonight, Clay-Chalkville won’t be back in area action until Sept. 8 when it hosts Shades Valley. Pinson Valley will also host the Mounties for its second Area 12 contest on Sept. 3.