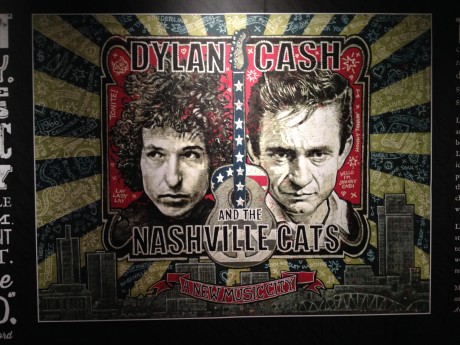 The new Nashville looks a lot like the old Nashville, give or take a couple of dozen skyscrapers. I was up there last weekend to visit an exhibit at the Country Music Hall of Fame and Museum, “Dylan, Cash and the Nashville Cats: A New Music City,” and I came away agreeing with the late Bob Johnston’s assertion: Bob Dylan deserves to be in the Hall of Fame.

But maybe that other Bob deserves to be there, too. Though Johnston died in Texas August 14, effects of changes the legendary record producer wrought in Nashville almost 50 years ago are still reverberating.

The Grand Ole Opry turns 90 this year, thanks in part to its success in dealing with generational shift. Last Saturday night, for example, the audience got to hear familiar names such as Connie Smith or John Conlee, but the biggest ovation was for a young duo called Striking Matches, practically rubbing two guitars together to set the audience ablaze. As Sarah Zimmermann and Justin Davis stood on the old stage wood upon which so many Opry legends have accepted their ovations, it was hard not to think about torches and their passing.

It was happening in Nashville in 1966 as well. Back then there were a lot more eating establishments with country singers’ names on them, because the sleepy town had become the worldwide corporate center for country music, thanks to the success of WSM radio’s Opry broadcasts. Thanks to the success of rock and roll music, however, country music was becoming marginalized in the 1960s. It was harder to make new country stars when all eyes were on young rockers.

What was easy to make in Nashville was classic country music. As Pete Finney, a curator of the CMHOF exhibit, wrote, “Word spread among artists that one could come to Nashville, hang out in a relaxed and convivial atmosphere, and make great records with musicians who were adept at many musical styles and incredibly quick at learning songs.”

One of those studio musicians was Charlie McCoy, a harmonica virtuoso who could play anything from which musical notes issued forth. Bob Johnston had taken over as Dylan’s producer for Columbia Records in 1965, just as Dylan was moving from folk to rock, and he was at the helm when Dylan started work on Highway 61 Revisited. Johnston brought McCoy to New York to sit in on the sessions, and Dylan was suitably impressed when McCoy laid down a seamless lead guitar part on “Desolation Row.”

When Dylan was ready to record his next album, Johnston stunned Columbia executives by moving the project out of Manhattan, where all previous Dylan records had been made, into the Columbia studio in Nashville. It seemed incongruous to them, and also to Dylan’s manager, Albert Grossman, that the politically progressive Dylan would find common cause with what they saw as uptight rednecks in Music City.

They overlooked the fact that one of Dylan’s close friends and admirers was Columbia’s own Johnny Cash, who made a Nashville record with Dylan’s song “It Ain’t Me, Babe” in 1965. Dylan was persuaded that a change of venue would help him capture on tape the new sounds he was hearing in his head—Johnston said, “I don’t think Dylan would come down and play with bad musicians”— and in February 1966 began the sessions that would result in perhaps the greatest double album of all time, Blonde on Blonde.

As he does in most places he hangs his hat, Dylan made Nashville cool. McCoy said later, “It was like the floodgates opened,” describing the influx of musicians who started booking sessions to emulate Dylan’s new blend of country and rock. The studio musicians, immortalized in a Lovin’ Spoonful hit single as “Nashville Cats,” lent their talents to an amazing string of albums by Joan Baez, Linda Ronstadt, John Stewart and more. Even solo Beatles would come to Music City once the word got out.

Johnston, vindicated by his Nashville gambit, would record with Dylan there for two more epochal albums. John Wesley Harding, recorded quickly in 1967 with only McCoy, drummer Kenny Buttrey and steel guitarist Pete Drake accompanying, was viewed as a rebuttal to the production excesses of late 1960s rock. The next year’s effort, Nashville Skyline, was Dylan’s foray into straight-no-chaser country music. The first track on the album featured Dylan and Cash singing the former’s ballad, “Girl From the North Country.” That duet would be performed live in June 1969 as part of the first episode of The Johnny Cash Show, a musical potpourri broadcast on ABC that, as Finney put it, had Cash “bringing together rednecks and hippies years before Willie Nelson.”

This entire saga takes up the whole second floor of the CMHOF museum, and it is a feast for an interested visitor’s eyes and ears. An amazing array of the era’s artifacts is on display, including countless musical instruments and items of stage wear. There are vintage video clips to see and dozens of illustrative recordings to hear, demonstrating the amazing amalgam of country and rock forged all those years ago in Music City.

You might not give contemporary country music a second thought, but take a pass through “Dylan, Cash and the Nashville Cats” the next time you’re in Music City between now and the end of next year and you probably won’t stop thinking about that kind of country for some time to come.