TRUSSVILLE – The Hewitt-Trussville volleyball team begins its 2015 campaign with a non-area clash this evening in Bryant Bank Arena. 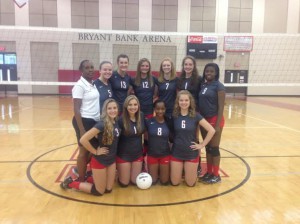 Riggins along with assistant coach Rachel Dickey will direct their team of ten through Class 7A, Area 6 this year. Four of the ten varsity team members are seniors.

The four veterans include Meagan Edwards, Brianna Hampton, Jordan Somers and Charyse Swann. Those four won’t lead Hewitt-Trussville into an Area 6 challenge until Sept. 15, when the Huskies welcome Vestavia Hills.

Once the Rebels make their way over, Hewitt-Trussville will have four regular season matches and a pair of tournaments under its belt. Riggins enters the season with 19 regular season dates set, three of which are against area competition.