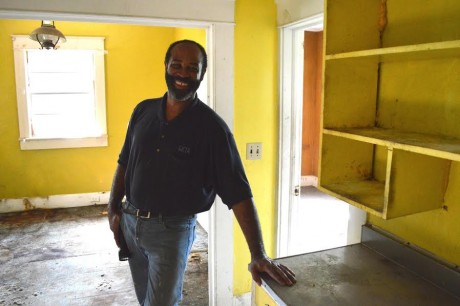 Despite setbacks, plans to repurpose Banks High School into an institute for construction technology still in the works. Photo by Cody Owens.

Watching Marvin Smith open the box of a brand new Hitachi paint shaver you’d think it was his birthday. “This mama is top of the line,” Smith said, cutting the box open in the hollowed out foyer of a home in Bush Hills.

Smith is in the middle of his organization’s first home renovation project, an unassuming two-story blue house that had been boarded up for decades. The 1930’s home has “good bones,” Smith said. “You won’t find any pine in here. This here is red oak. Really sturdy stuff,” he said, slapping one of the exposed beams overhead.

Smith is the founder and CEO of the Goal Institute of Construction Technology and Arts (GICTA), a program he hopes will soon teach young men and veterans construction trades while simultaneously restoring dilapidated homes in the surrounding communities.

That’s what Smith said he lives for, repairing homes rather than demolishing them.

In an effort unrelated to the current GICTA project, Smith has refurbished four other homes in the same cul-de-sac his organization is working in now.

“While the city is out there doing what they can to tear down old, run-down homes, we are trying to keep their original integrity intact and rebuild them from the inside out,” Smith said as he ascended a narrow staircase leading to the second floor. “You just don’t see a lot of architecture like this anymore and we just do our best to bring it back to life.”

Recently Smith’s plans to repurpose the long-closed Banks High School into an institute for trade and technology hit a road bump after the city terminated the memorandum of understanding between Smith’s organization and the city after Smith and an army of volunteers spent 18 months cleaning up the abandoned high school.

In a May 28 letter, Mayor William Bell informed Smith that he would have until June 8 to present an acceptable proposal for the Goal Institute that would move into the refurbished Banks.

“We have thoroughly reviewed the feasibility study that you submitted as well as the latest submitted documents from GICTA and determined that the proposal lacks the required documentation to fully assess the potential to implement this project,” Bell wrote.

He noted that the city had not received documents outlining financial commitments or an acceptable business plan for the project.

Whereas originally, after the MOU expired, Smith was ordered to cease and desist all activity at Banks High School, he said that he has been in contact with the city and is still hopeful that a deal can be reached. In the meantime, Smith decided to reach out to Governor Bentley’s office to see if he could secure state and federal funding for his project.

“We met with Governor Bentley on Friday. We ended up telling him about what we were doing and trying to see if he can sign a letter of intent,” Smith said.

“He wanted to make sure that we would have a sustainable business plan, but he put us in touch with a representative to try and work out the details. But I think it went really well,” Smith continued.

As for the house Smith is working on now, he plans to sell it at cost and use the money to buy and renovate another property. “The plan is supports itself because we are fixing these houses and selling them to families for the cost of repairs. We’re not trying to get rich, we’re trying to rebuild our communities,” Smith said.

Right now, GITCA is currently trying to raise funds so that city and state officials will sign off on providing available funding. “I really think the city is doing what they can to make it work,” Smith said as he opened the door to another house he is planning on repairing.

“See all this here?” Smith asked, pointing to a worn out wall. “Some people see this as damage, I see this as opportunity. This can be a teaching opportunity for young men. And at the same time, we can be cleaning up our neighborhoods.”

By his estimates, with a team of able body workers and volunteers, Smith said it typically takes two or three months to flip one of these homes. “That’s three months of curriculum, right there,” Smith said. “When I’m in here and I’m seeing all the things that can be fixed in these old homes, I’m in Heaven.”

Once funding is in place, Smith hopes to open up the first campus at Banks High School and begin rebuilding abandoned homes that surround the East Lake campus.