Week 3 Tribune Players of the Week

Junior wideout Nico Collins attracted the attention of numerous SEC programs over the offseason, and for good reason. The rangy pass catcher, now the recipient of two consecutive Tribune Player of the Week awards, has jumped out to a fast start this season. His eight receptions, 150 yards and two scores (one rushing) helped the Cougars improve to 3-0 with a win over No. 10 Hillcrest-Tuscaloosa. For the season, he has 18 receptions for 270 yards and four overall touchdowns. Collins is awarded by Erik Harris. 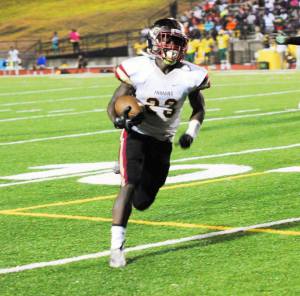 He has completed the hat trick. Pinson Valley running back Torrey Hendrix has carried the load for coach Matt Glover’s Indians in the early days of the season and collected back-to-back-to-back Tribune Player of the Week awards in the process. The Junior benefited from big holes provided by his veteran offensive front against Woodlawn, but consistently lowered his shoulder for yardage even when the holes were clogged up. Hendrix ran for 129 yards and three touchdowns on 18 carries against the Colonels. Hendrix is awarded by Erik Harris. 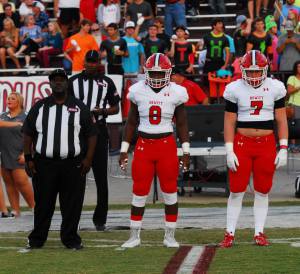 For the first time this season a defensive player has claimed the Tribune Player of the Week hardware. Hewitt-Trussville defensive end Jaison Williams earned the honor with a stellar performance over Region 3 foe Tuscaloosa County. He worked his way to eight tackles, two for loss, 1.5 sacks and a quarterback hurry on Friday night. Williams’ pass rush helped the Huskies hold the visitors to only 62 yards through the air. Williams is awarded by Kyle Parmley.