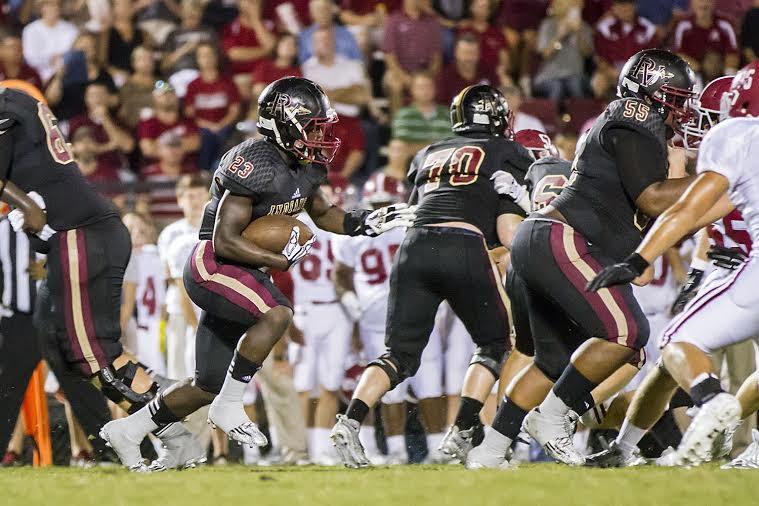 PINSON – Gardendale rolled up 444 rushing yards en route to a 42-13 victory over host Pinson Valley on Friday night at Willie Adams Stadium in a crucial Class 6A, Region 6 bout.

The Indians (3-1, 1-1) struggled defensively all night, yielding six touchdowns on the ground, including four from Gardendale’s Dequa Houston. The senior running back carried the ball 19 times for 164 yards, as three of his final four touches resulted in a score. 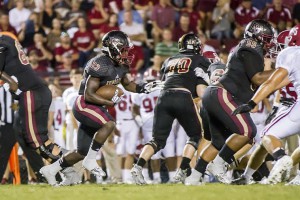 Gardendale chewed up time and yardage on most possessions and held the reins on Pinson Valley’s offense virtually the entire evening. The Rockets picked up 24 first downs, compared to only ten “Trussville Tribune First Downs” for the Indians.

“They took it to us,” Pinson Valley head coach Matt Glover said. “My hat is off to them. We have to get better.”

Houston and quarterback Zach Cupps each scored in the first quarter to get the Rockets (2-1, 2-0) off to a hot start. Pinson Valley rebounded late in the second quarter, driving 85 yards on nine plays in three minutes to bring the margin to 14-7 on a 21-yard pass from Jackie Matthews to Keimon Norman.

One of the plays on that drive was a 23-yard strike over the middle to sophomore receiver Liallen Dailey from the left arm of Matthews. Dailey caught a season-high four passes for 75 yards on the night.

“It felt good (to catch four passes), but I wanted to get the win. The win would’ve been better,” Dailey said.

Errius Collins returned the opening kickoff of the second half all the way to the Gardendale 35-yard-line, putting the Indians in prime position to potentially tie the game. However, Pinson Valley only notched a single first down in the drive and turned the ball over on downs, essentially “taking the wind out of our sails,” according to Glover.

“We responded and made it 14-7 before the half, got a big kickoff, and didn’t score,” he said. “There are a bunch of things I can point to, but we just didn’t play good.”

Following the turnover, Gardendale pulled away for good. Houston scored for the second time on the ensuing possession, and the Rockets quickly forced the Indians to punt it right back. After another touchdown from Houston, Jake Stewart picked off a pass from Matthews, leaving the score at 28-7 through three quarters.

Matthews completed 10-of-22 passes for 228 yards and a pair of touchdown passes on the night, the second one of those being a 74-yard throw to Collins late in the fourth quarter. That late score propelled Collins over the century mark, as he finished with 109 yards on four grabs.

Houston scored for the final time a minute into the final period, and would not touch the ball the rest of the night. Backup running back Omari Burton carried the ball 12 times in the fourth for 63 yards and a score. Tyemond Dunklin also had 11 rushes in the game, picking up 78 yards. Cupps ran for 84 on his own, as the Indians had no answer for any of the Rockets’ ball carriers. Gardendale only registered two negative-yardage rushing plays in the game.

“We have to tackle better,” Glover said. “That’s coaching. We’ll get it fixed. Our kids will bounce back. I have full faith in them.”

Running back Torrey Hendrix worked hard all night, but could never break free. He rushed the ball 21 times and picked up 89 yards while also catching a 23-yard screen pass.

With a huge game against crosstown rival Clay-Chalkville next week, Glover did not feel like his team overlooked Gardendale. The Rockets were simply the better team on the night.

“I thought we were ready, but they came out and jumped on us,” he said. “We didn’t respond.”

The idea is simple for the Indians as they look ahead to a matchup against the defending state champions.

“Got to grind all next week, Monday through Thursday,” Dailey said.

Gardendale stays in Region 6 play as well, as Center Point pays a visit.