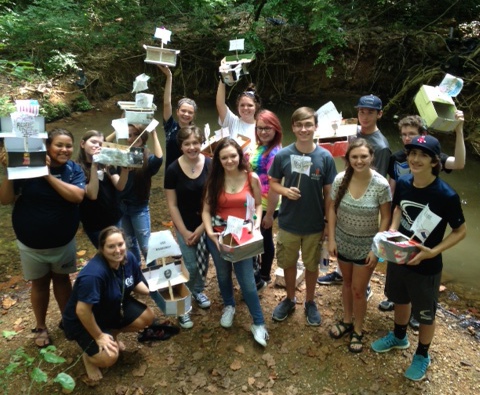 Students show off their boats after setting sail. Submitted photo

Come sail away with Clay students

CLAY — Students at Clay-Chalkville High School recently took to the water to learn about European history in their Advanced Placement course. The students were studying the Age of Exploration and Conquest of 1450-1650 A.D. 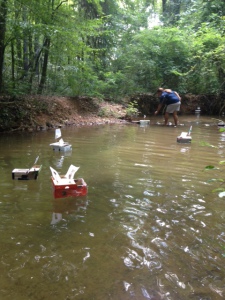 Ships made by the class sail Cosby Lake. Submitted photo

Clay teacher Maggie Rasberry has taken a different approach to the cirriculum, by teaming up her class into four teams based from WWII leaders: Hitler, Stalin, Eisenhower and Mussolini. She challenged her teams to build “ships” from cardboard boxes, among other materials. The teams then constructed 2-4 small-scale ships each from the materials and attempted to float them at Cosby Lake.

A time limit was placed on the groups, forcing them to build teamwork and communication skills as well.

“They were only given 50 minutes to actually construct their ships, so they had to use their time wisely and work as a unified team,” Rasberry said. “I overheard one group immediately start delegating roles and discussing how they had to work together. Nobody sat twiddling their thumbs. Every single student knew exactly what they needed to do and that they were trying to accomplish something as a team. Some students worked on the sails while others were the actual engineers and builders.”

The team who built the fastest, most buoyant ship won exemption from the essay portion of their most

“For this assignment in particular, they were really excited. How often is it that you get to build boats 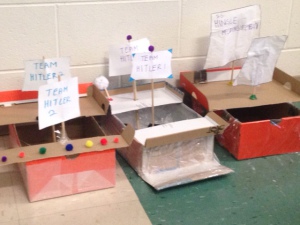 Team Hitler boats were wrapped with wax paper to help their floating ability. The strategy worked as two of their boats finished in the top three.

and test them out in a high school history class?” Rasberry said, “It is a unique hands-on learning assignment, and I’ve already started planning a way to do something similar for advancements in military technology when we get to our World War I unit. Maybe we’ll get to build tanks or submarines.”

The students really impressed her with their leadership abilities, she said. “My role was quite small. I complimented their craftsmanship and

went around with a box cutter if they needed it, but that was all I needed to do.” 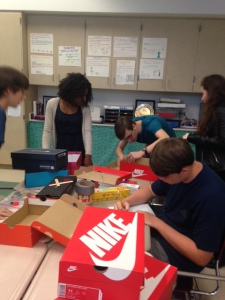 CCHS students working on their boats in the beginning stages. Submitted photo

Rasberry made a demonstration model and aptly named it the USS Rasberry to show the class what a finished product might look like, but the students were given complete creative control.

The winner of the competition was Team Hitler. Two of their boats were in the top three of the class.