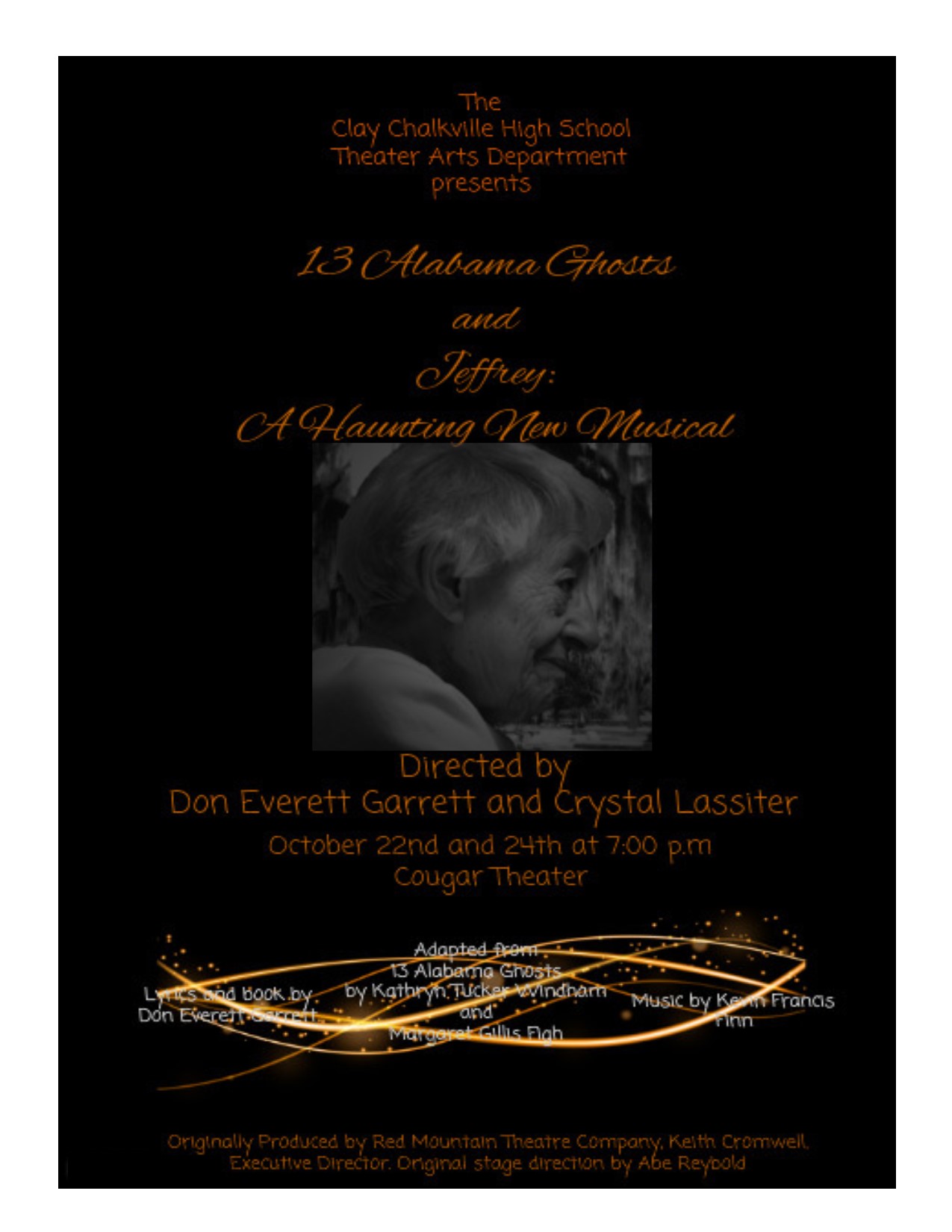 Official poster for the event.

CLAY — For those who were unable to attend “13 Alabama Ghosts and Jeffrey… A Haunting New Musical” at the ACTA Theatre in Trussville this month, two more shows have been added at Clay-Chalkville High School. 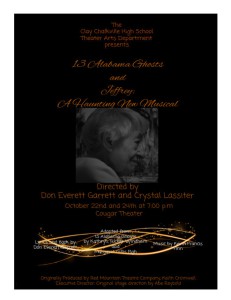 Official poster for the event.

The shows added will benefit the Clay-Chalkville High School drama department, and drama teacher Crystal Lassiter has a role in the play.

Lassiter said the shows are very important to help fund her department at the school, and she hopes the community will come out and support the school and the program.

The show was arranged by Don Everett Garrett, and will be directed by him and Lassiter for these two performances.

“I am absolutely ecstatic that we are able to display such a beautiful work, written by Trussville’s own, Don Everett Garrett. The musical, based on the book by Kathryn Tucker Windham, offers a visual representation of the history of this great state and I am honored to have it as my first Fall Show here at Clay-Chalkville,” Lassiter said. “It gives us, the theater students and myself, the opportunity to work more closely together, building solid relationships as we perfect our craft, and it also allows me the opportunity to do that which teachers are charged to do-model. My hope is that I serve as an example of professionalism and excellence in this process.”

The performances will benefit the drama department, something Lassiter says is very important to allow the department to grow and succeed.

“It’s crucial for the growth of the program that the community is able to see the plethora of talent that is here at Clay-Chalkville,” Lassiter said. “Mr. McIntosh has built a reputable program here, and I can only hope that I am not only able to fill his shoes, but find the balance to stand on his shoulders, partnered with this community, and provide another means for every student at Clay, fueled by ignited passion, to fulfill his or her purpose. Without the backing of the community, this is not possible. It does, indeed, take a village.”

Lassiter added she expects big crowds at these extra showings because the previous shows had waiting lists of those who were unable to get a ticket.

“My expectation is for every seat in the Cougar Theater to be filled both nights. I understand that there was a waiting list of people who were unable to be seated at the last showings, and that is a great problem to have. The dates were scheduled strategically,” she said. “Thursday night is for the audience members who may not be able to attend a weekend show; Saturday is for the audience members who works during the week. Even though I am a firm supporter of arts in education, we are a community that supports “every student, every day, the Cougar way” So, I left Friday night open for everyone to  come out and support the Cougar football team on Senior night, as they take on — and defeat — Gardendale.”