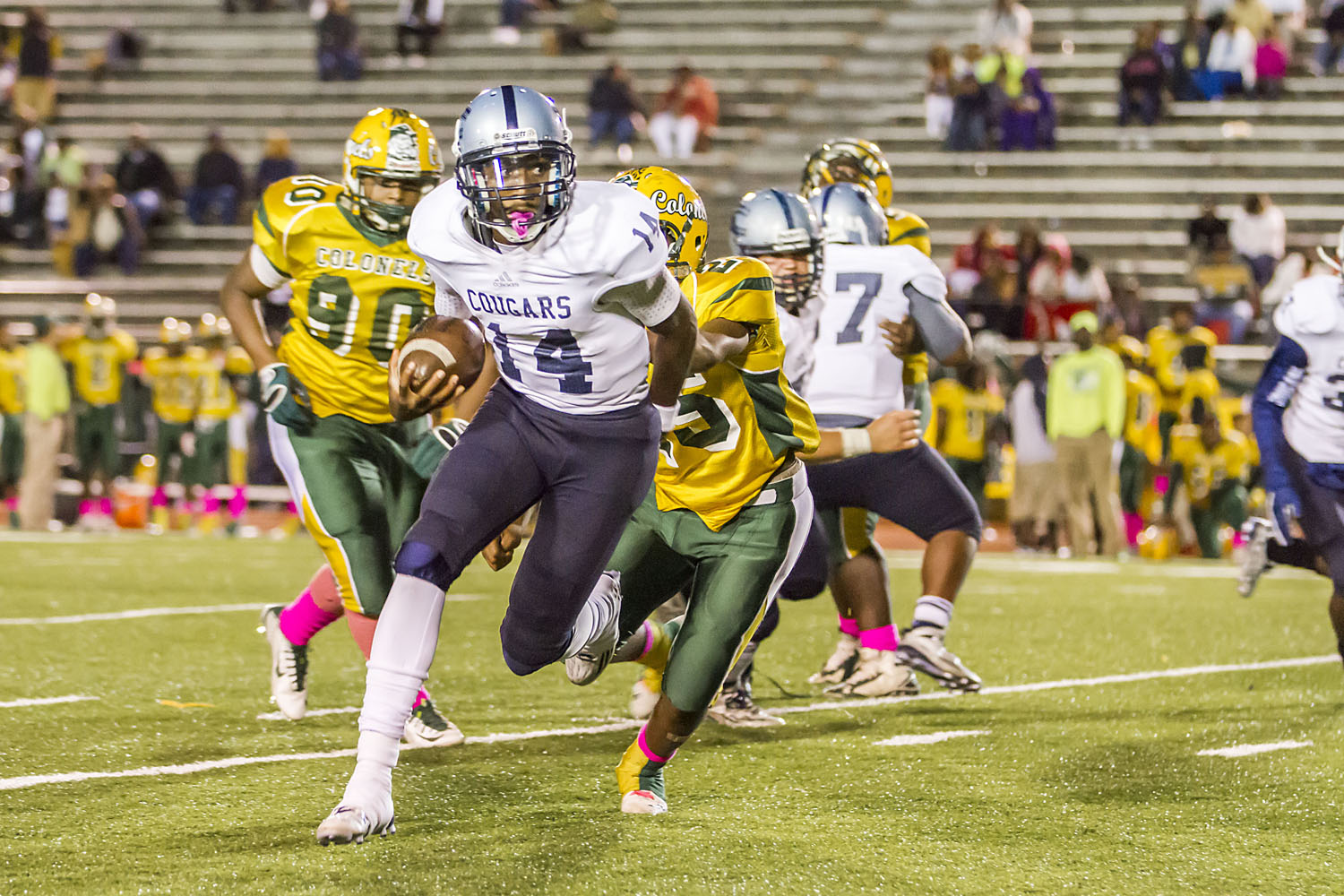 BIRMINGHAM – The stage has once again been set.

With No. 1 Clay-Chalkville rolling over Woodlawn 72-6 this week, the Class 6A, Region 6 championship will be decided by one game that will kickoff next Friday night at Cougar Stadium. For the second year in a row, Clay-Chalkville will battle Gardendale for region supremacy. Last season’s title bout was played in Driver Stadium and went in favor of the Cougars, 45-20. 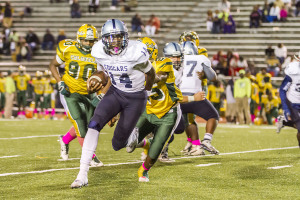 It’s safe to say that Clay-Chalkville (8-0, 5-0) didn’t get ahead of itself, as its starters were pulled after the break with a 50-0 lead built over the Colonels. The Cougars found the end zone on their first seven drives of the game to put the contest out of reach before the start of the second half.

The only drive that didn’t end with a touchdown for Clay-Chalkville was its final possession of the first half when quarterback Ty Pigrome took a knee with one second remaining in the second quarter.

The dominant effort resulted in Clay-Chalkville head coach Jerry Hood’s 100th career win on the field. Included in that win total is the vacated wins from 2011.

“It feels great to be a part of the team that helped him accomplish a big goal in his career,” said Clay-Chalkville senior T.J. Simmons.

After the Cougar’s defense forced its first of seven three-and-outs that resulted in a safety on a high snap by the punt snapper, Pigrome got the route started with a 24-yard touchdown strike to a wide open Nico Collins on his second snap of the contest. Those two would hook up again in the first quarter. This time, Pigrome looked for his 6-foot-4 junior on a third-and-long that went 40 yards on a simple deep ball to give the good guys a 30-0 advantage.

Pigrome turned in an 11-for-13 night for 189 yards and three scores. Along with his two scoring strikes to Collins, Pigrome also went to running back Brandon Berry for a 14-yard score. Berry caught the ball in the flats, read his blocks and darted down the visitor’s sideline in a hurry.

Berry punched in the visitor’s second touchdown of the night on a 1-yard plunge right up the middle. He, along with most of the Clay-Chalkville starters, set his helmet aside following the halftime festivities.

Defensively, the visitors yielded little. Woodlawn’s one score of the night—a 27-yard scamper by Samuel Stanton—came in the third quarter against Cougar backup defenders.

The Colonels moved the chains seven times and finished with a 3-for-11 effort on third downs. Clay-Chalkville took advantage of some sloppy ball handling by recovering four fumbles in the game. Corey Lee, James Theus and Qutavius Barber all scooped up Woodlawn fumbles. Jamarlin Sewell also recorded an interception for the Cougars.

Collins saw to it that the Colonels paid for Sewell’s turnover by taking a reverse play ten yards to the end zone. The hosts had the misdirection defended well, but Collins made a defender miss in the backfield to open the door to the end zone, updating the scoreboard to 23-0.

A.J. Walker put a bow on the first 24 minutes of play with a beastly 15-yard touchdown run. He carried defenders over the goal line with less than three minutes remaining in the second quarter.

Backup quarterback Darryien Wilson performed well in reserve duty for Clay-Chalkville. He completed five of his six passing attempts for 89 yards and a 61-yard touchdown to sophomore Quintin Young.

Wilson led three scoring drives through the second half. He took thing into his own hands by taking a quarterback draw 30 yards to paydirt before sophomore Keauntaie Moultrie ended the beating with a 15-yard rushing touchdown.

“I feel like the only thing that can stop us is us,” said Simmons. “If we don’t play to how we play or we don’t have the pace that we want to have, it’s going to slow us down.”

Clay-Chalkville will host Gardendale next week with a region championship on the line. Woodlawn is scheduled to visit Huffman for its final region test of the year.