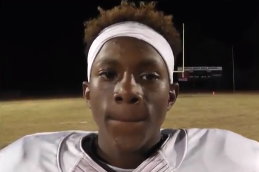 Week 9 Tribune Players of the Week

Pinson Valley junior cornerback Ty Woods and his defensive unit more than held up last week in region action. The Indians held Center Point to 52 yards of total offense in a shutout effort. Woods recorded his first two career interceptions, returning the first one 16 yards to the end zone. Woods is awarded by Kyle Parmley.

Senior Darryien Wilson might be Clay-Chalkville’s backup quarterback, but no one would’ve known that last Friday night at Lawson Field, as he led the Cougars’ offense on three touchdown drives on four second half opportunities. He took a quarterback draw 30 yards for a score and hit Quintin Young for a 61-yard touchdown pass. Wilson is awarded by Erik Harris.

He’s been known for his track and field efforts for quite sometime, but now Hewitt-Trussville junior wideout Noah Igbinoghene is a two-time Tribune Player of the Week recipient on the gridiron. Igbinoghene contributed in the Huskies win over Mountain Brook with his receiving and rushing ability. He went for 110 receiving yards for two touchdowns to go along with 51 yards on the ground. Igbinoghene is awarded by Chris Yow.