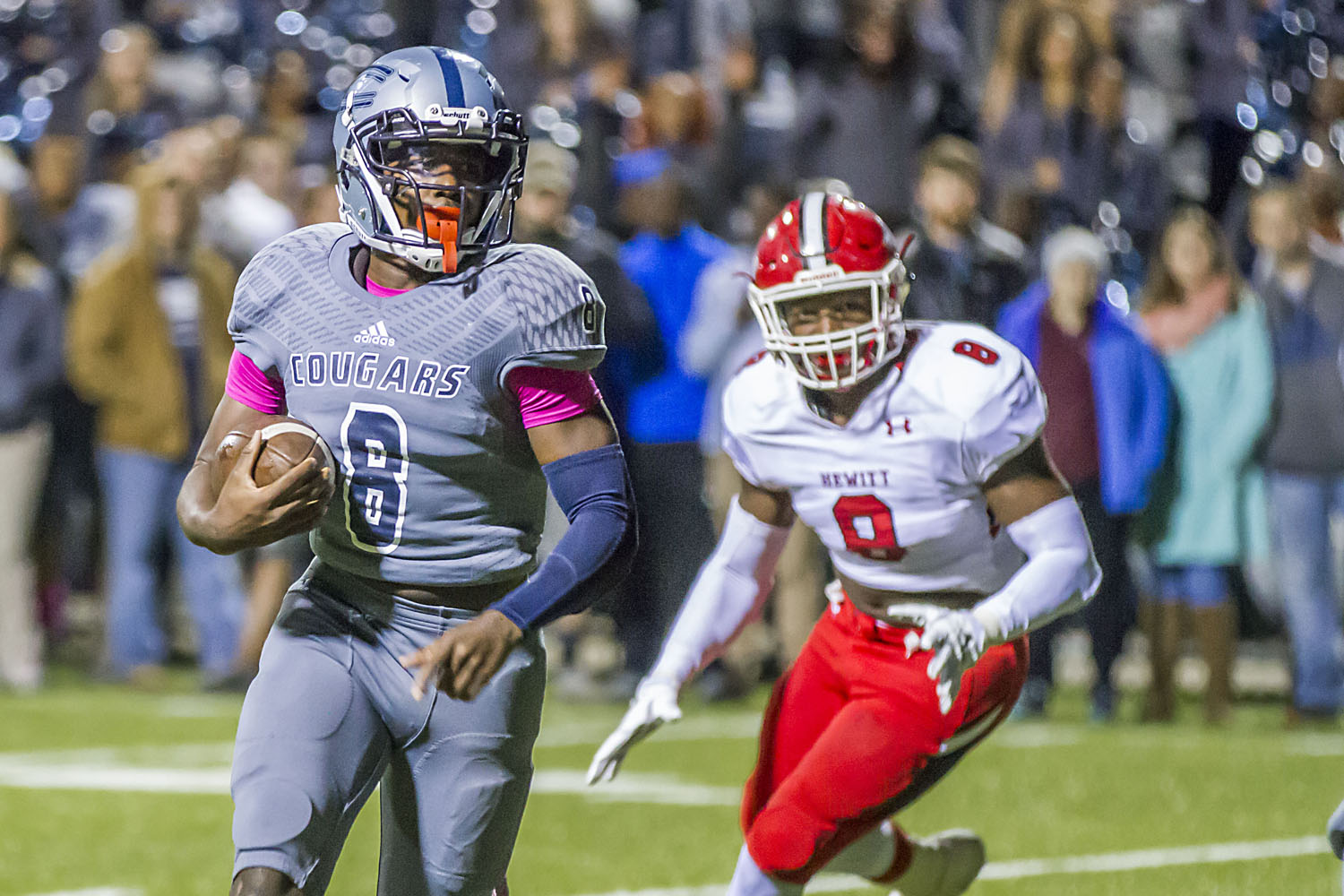 CLAY – Tonight’s conflict at Cougar Stadium might not have had any postseason implications, but that didn’t make the rivalry win over Class 7A Hewitt-Trussville any flatter for Clay-Chalkville head coach Jerry Hood. 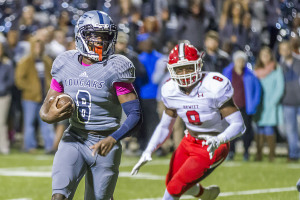 The absence of Hewitt-Trussville senior quarterback Zac Thomas was visible. Thomas suffered a leg injury in last week’s game, leaving the starting job to sophomore Davis Burgin, who performed well in his first career start. The Sophomore went 10-of-20 through the air for 128 yards and a pair of scores, but it wasn’t good enough to outlast the defending Class 6A Back of the Year award winner on the home sideline.

Cougar quarterback Ty Pigrome was virtually unstoppable as he made seven different trips (five passing and two rushing) to the end zone. He connected on 14 of his 24 passing attempts for 292 yards and the five scores.

His favorite target was a familiar one – senior wideout T.J. Simmons, who pulled down six catches for 130 yards and four scores.

The opening score of the night went from Pigrome to Dez Williams on a perfectly executed 43-yard post pattern. Pigrome placed the ball over Williams’ shoulder and the Pinson Valley transfer fought off tight coverage to draw first blood.

That touchdown sparked the beginning of a back-and-fourth opening half of play that ended with the hosts holding a slim 34-28 advantage.

Hewitt-Trussville primarily kept the ball out of the air after Burgin threw an interception to Jamarlin Sewell on the first drive of the evening. They went with a ground-and-pound approach, and they made it look good.

Grayson Cash took a wildcat snap and put 79 yards behind him in a hurry to even the score at 7-all midway through the first quarter. The Huskies’ next drive ended just as quickly when running back Jarrion Street marched down the right sideline for a 75-yard score on the next Hewitt-Trussville snap to take a 14-13 lead. Street ended the game with 171 yards and two touchdowns and 26 carries.

“(Street) is a great player,” said Hood. “The bottom line is we didn’t read our keys and do our job. If you don’t do your job against a great player, they’re going to take it to the house. Hopefully we’ll learn from that.”

The visitors would claim another lead in the second quarter when Burgin connected with Ed Johnson from ten yards out. Johnson went up for a high pass, drug his spikes and secured a go-ahead touchdown in the back corner of the end zone for a 21-20 lead.

Street would later cap a 10-play drive with a 7-yard touchdown run between the tackles with only 1:17 remaining on the second quarter clock.

Clay-Chalkville only needed a few of those seconds to construct a two-play scoring drive, ended by Pigrome’s 29-yard bulldoze down the left side to end the first 24 minutes with a 34-28 lead.

From there, Cougars’ defensive coordinator Sean Talsma came away with the crucial stops needed to finalize another undefeated regular season. His unit only allowed seven points in the second half.

That one score was the product of Clay-Chalkville’s second lost fumble of the evening. The Huskies took over at the 24-yard-line and went that far in seven plays. Burgin rolled right on 4th-and-11 and found a crossing Noah Igbionoghene for a 14-yard score to claim Hewitt-Trussville’s final lead of the night at 35-34 late in the third.

Class 7A Hewitt-Trussville visits No. 3 James Clemens for the opening round of the playoffs next Thursday night. The Cougars begin Class 6A postseason play at home against Cullman next Friday night.