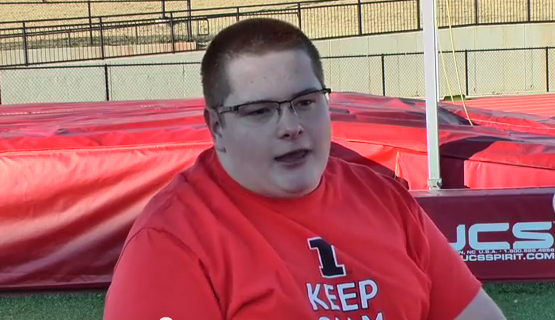 “When I throw the shotput it’s basically like an able-bodied throw, but it’s a little bit different because I can’t stand up and do the original glide,” said LaFon.
The senior, formally from Atlanta, became the first indoor paralympian in state history when he threw 3.86 meters in the shotput event at Birmingham’s Crossplex facility.

“I’m just happy I’m here and able to come out and compete thanks to Lakeshore [Foundation] and Hewitt-Trussville,” said LaFon, who has Cerebral Palsy. “Coach Dobbs is amazing and everybody at Lakeshore is amazing and I’m just thankful to the Crossplex for letting me go down there and do my thing.”

LaFon, a senior for the Huskies, wants to send a message to other paraplegic athletes.

“Practice, practice, practice,” said LaFon. “Never stop trying and never stop believing.”
“When you’re a kid learning how to play wheelchair sports or going out and competing in adaptive sports, just don’t give up because it gets better and if you can practice and work and do what you love, you can accomplish anything,” continued LaFon, who holds a 3.38 GPA.

He hopes to continue his days as a student-athlete at the collegiate level following graduation. LaFon wishes to enroll at the University of Illinois where he wants to compete on the basketball floor and on the track for the Fighting Illini.

“I’m trying to go to the University of Illinois and play basketball as one of their lowest-class players, which they really need right now,” said LaFon. “They have one of the most recognized track and field programs for adaptive sports in the world.”

“My ultimate goal for throwing and for track and field is to be able to get to the (2020) Paralympics and be able to go to Tokyo and represent the USA,” said LaFon, smiling with confidence.

He was the only athlete to throw from a wheelchair, and earned the Huskies one point at Saturday’s event. The Hewitt-Trussville boys finished the day No. 14.