Players were chosen based on individual statistical success along with importance to their respective team’s overall success throughout the 2015 season. An offensive, defensive and special teams unit was selected to go along with an “honorable mention” list. 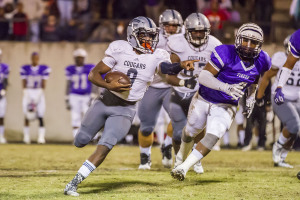 Clay-Chalkville quarterback Ty Pigrome finished his senior season as the Alabama Gatorade Player of the Year. photo by Ron Burkett

QB – Ty Pigrome, Sr., Clay-Chalkville: Finished a stellar career with a 29-1 overall record, coupled with a 2015 Alabama Gatorade Player of the Year award. He totaled 62 touchdowns as a senior to land on the All-Tribune roster for the second consecutive season.

RB – Jarrion Street, Sr., Hewitt-Trussville: Currently committed to play for Ole Miss. The senior also landed on last year’s All-Tribune Team as an “athlete” and lived up to that billing in 2015 with 1,557 all-purpose yards and 17 scores.

RB – Brandon Berry, Sr., Clay-Chalkville: Averaged 7.7 yards per carry (133 attempts for 1,028 yards) as a first-year starter for the Cougars. With limited goal line touches, Berry got to the end zone nine times.

WR – T.J. Simmons, Sr., Clay-Chalkville: Scored 20 touchdowns through the air, once on the ground and another in return duty as a senior. Simmons, a devastating blocker on the edge, is committed to play for Alabama.

WR – Errius Collins, Sr., Pinson Valley: In his first year split out wide, he pulled in 38 receptions for 646 yards and eight touchdowns. Collins, a converted quarterback, was the Indians’ most explosive offensive player, recording a 78-yard long for the year.

WR – Nico Collins, Jr., Clay-Chalkville: Led the No. 1 Cougars with 60 catches for 1,103 yards and 16 trips to the end zone. The junior is expected to be the centerpiece of coach Jerry Hood’s offense in 2016.

OL – Cole Garrison, Sr., Clay-Chalkville: Served as a reliable protector of his quarterback’s blind side all year. In the running game, Garrison helped pave the way to 3,936 yards for the Cougars on their way to a 14-1 season.

OL – Brandt Selesky, Sr., Hewitt-Trussville: Made a beautiful transition from center to left tackle in his final year with the Huskies. His diversity as a blocker makes him a return representative on the All-Tribune Football Team.

OL – Kyle Miskelley, Sr., Hewitt-Trussville: Helped create running lanes for a dominant Huskies’ running game in 2015. Miskelley, like Selesky, has blocked his way on to the first two All-Tribune rosters.

ATH – Zac Thomas, Sr., Hewitt-Trussville: Will be missed next season. The Jacksonville State pledge threw for 1,461 yards and ran for another 829 in nine outings as a senior. 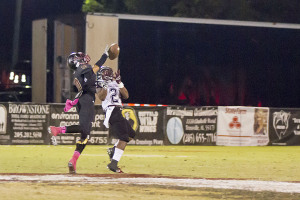 Pinson Valley cornerback Jay Woods breaking up one of his nine passes in 2015 against Shades Valley. photo by Ron Burkett

DL – Jaison Williams, Sr., Hewitt-Trussville: Was a problem for offenses in Class 7A. Williams was diverse, recording a team-high nine sacks and securing 13 tackles for loss. He finished the year with 96 total tackles.

DL – Desmond Scott, So., Pinson Valley: Was an anchor on the Indians’ physical defensive front. The youngest member of this year’s All-Tribune roster got to the passer often, recording seven sacks, forcing two fumbles and eating up a team-high 13 tackles behind the line of scrimmage.

DL – D.J. Gregory, Sr., Pinson Valley: Was a seasoned leader in the Indians’ defense from the beginning. Gregory, a legacy on the All-Tribune Team, finished the season with 24 tackles, seven of them were for loss.

LB – Jalen Williams, Sr., Hewitt-Trussville: Got in the backfield often in his final year with the Huskies. The two-time All-Tribune member secured 16 tackles for loss this season and is currently committed to Columbia.

LB – Bailey McElwain, Sr., Hewitt-Trussville: Is bound for Stanford as a fullback, but did most of his work on the defensive side in 2015. In his second year as an All-Tribune performer, McElwain averaged six tackles per game.

LB – Nicholas Jackson, Jr., Hewitt-Trussville: Led the Huskies with 108 total tackles. The junior shined in a strong Hewitt-Trussville linebacker corps as he ran down an impressive 83 solo tackles.

LB – Zapeth Cunningham, Jr., Pinson Valley: Made a huge jump from his sophomore to junior season. Cunningham, the younger brother of former Indian standout Zach Cunningham, led the team with 94 tackles in 2015.

DB – C.J. Toney, Sr., Clay-Chalkville: Transferred in from Shades Valley and made an immediate impact for the Cougars. Toney broke up seven passes and intercepted another three on his way to a Super 7 berth.

DB – Nick Battle, Sr., Clay-Chalkville: Showed his durability in 2015 as one of the two returning starters from the 2014 state championship team. Battle recorded 63 tackles and pulled down a pair of interceptions throughout his senior season.

DB – Seth Keahey, Sr., Hewitt-Trussville: Came up to average 7.2 tackles per game. The defensive back also held up in coverage, intercepting three passes and breaking up another four. 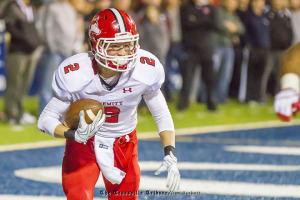 AP – Grayson Cash, Jr., Hewitt-Trussville: Helped the Huskies in a variety of ways as a junior. He finished the year with 503 all-purpose yards and four touchdowns.

K – Andrew Van Winkle, Sr., Clay-Chalkville: Had a busy leg in his first season with the Cougars, and took advantage with an 88-for-93 effort on extra points. Van Winkle, a transfer student from Shades Valley, would also connect on ten of his 16 field goal attempts, finishing the year with 118 points.

P – Errius Collins, Sr., Pinson Valley: Shined in the punting game for the Indians at times. He showcased his ability to flip the field at any time for coach Matt Glover, who leaned on a strong defense this year.