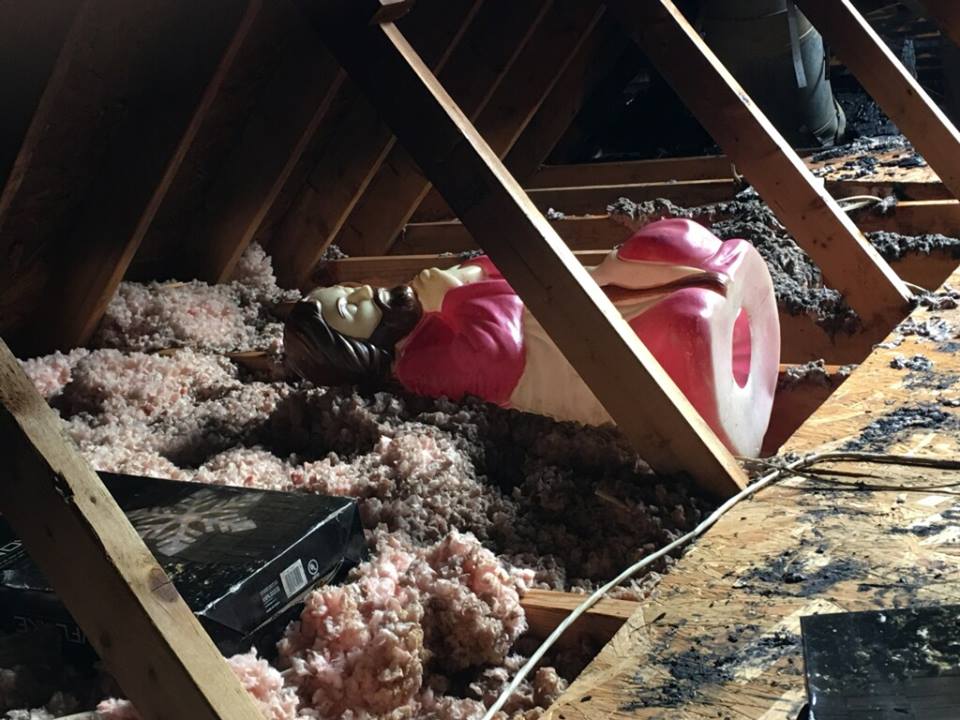 A nativity scene lawn ornament was untouched by the fire that destroyed the Dawson home. Photo courtesy of Eddie Dawson

CLAY — When Eddie Dawson opened Wing-A-Fish in Clay, the restaurateur knew the first few months might be tough on him. What he didn’t expect, however, was a fire destroying his home during that same time span.

Saturday night, however, that became the reality. 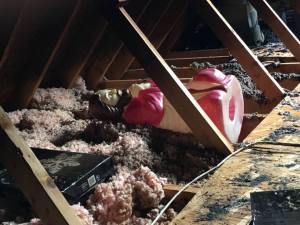 A nativity scene lawn ornament was untouched by the fire that destroyed the Dawson home. Photo courtesy of Eddie Dawson

“We worked late Saturday night. We usually try to build a fire and sit around the fireplace and enjoy the holiday,” Dawson said. “This time was different. Either something was nested inside the chimney or build up from over the past year.”

The fire started in the chimney, and the Dawsons lost almost everything.

Dawson said the total loss is about 90 percent. Some clothes were salvageable, and the cleanup crews are working to see what else can be saved.

One small item of note, however, did not become engulfed in flames. A Christmas nativity scene prop was untouched by the flames, something Dawson said was remarkable.

“When we were trying to find something positive and to understand why. So many people in life question God and ask, ‘Why do bad things happen to good people?’ Everything around us was burnt, scorched, but laying there in the middle of all of it was the Father,” Dawson said. “I stood him up and said, ‘Somebody needs to see this. Somebody needs to be a believer that through it all, taking everything we had, he still showed up in the fire.’”

Dawson said his 13-year-old son was sleeping within feet of the chimney when the fire began, but luckily he was able to awaken him and get him out. None of the family members were hurt in the fire.

The family has had to relocate to a hotel for a short time, and the damage assessors say the home, which is about 75 percent brick, will have to be torn back to at least the studs and rebuilt from scratch.

Losing everything hasn’t stopped the Dawsons, however. The family was at their restaurant the next day with the doors open for business.

“We were back open on Sunday, believing the devil can’t take what’s promised,” Dawson said. 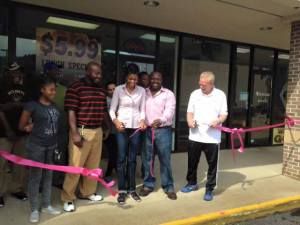 The Dawson family at the Grand Opening of Wing-A-Fish in Clay. Submitted photo

This was only  a minor setback according to him, and the community support has certainly restored his faith in others.

“We are humbled and grateful to have the community. I can’t think of anyone who hasn’t stepped up to offer to give us whatever we needed. We are devastated, but our belief is that it will come back. It’s a new life,” he said. “Being in Clay is great. People here are responding well. This is a family-owned business, my wife works here, my kids work here. It’s really a family business.”

The business is open

The minor setback has not hurt the family’s faith, despite the losses.

“We were assessing the damage, and everyone was in tears and was hurt. It was something we have worked for to accomplish something different. I’ve worked since I was 13 to get where I am, I saw it go up in smoke in one hour,” Dawson said.

But finding that one piece of evidence, no doubt left for a reason, reminded him of a promise.

“People look at us and wonder how we can lose everything and still be happy. It’s because we believe it will come to pass,” he said. “This just brought us back to the 3 Hebrew boys in the fiery furnace. If he showed up in the fire with them, he can show up in the fire for us.”