VESTAVIA HIILS –Danielle Yancey, of the reality television show Jersey Belle, said her surveillance camera caught a naked male wearing a Ronald Reagan or Richard Nixon mask outside her Vestavia home. Yancey posted the video as a warning to alert neighbors of the incident. 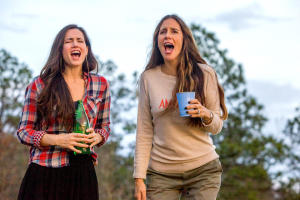 Yancey’s post on social media said, “This is the video of the Nude Boy coming into the back part of our house. He was wearing a mask and also a sock on his private part. Please be careful tonight, be aware of your surroundings and lock your doors!! Stay safe! I hope this does not happen to any of you. The reason the nude boy ducked down and ran is because he saw my husband walking by the window. My husband saw him and immediately tried to go out to catch him. If by chance you know who did this, please pass along the information!

Yancey told Carol Robinson of The Birmingham News that the incident was reported to the Vestavia police, but the person had not been located.

Robinson also reported that Vestavia Hills police Lt. Kevin York said they were also searching for a teenage streaker around Vestavia Hills Baptist Church after receiving a report around 11 p.m. on New Year’s Eve. York told Robinson that kids were known to hang out in the area.