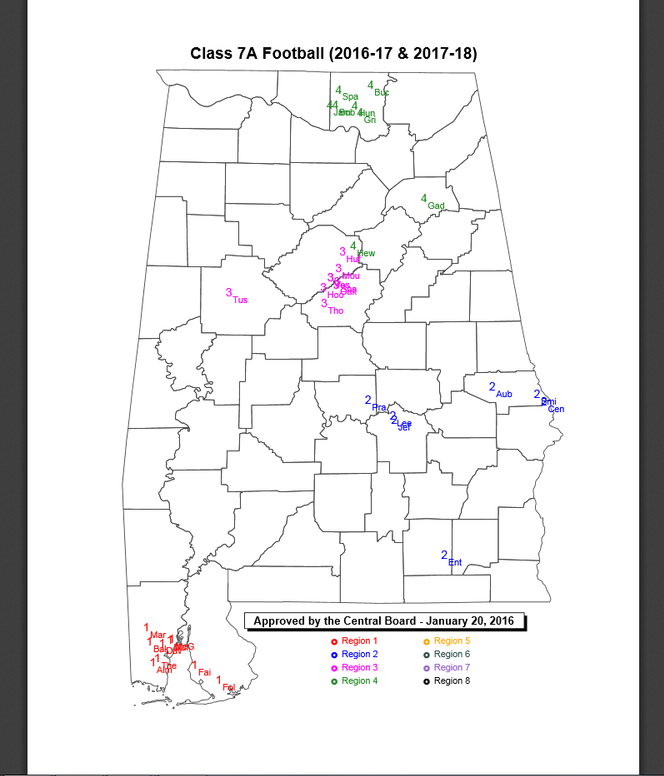 By The Trussville Tribune staff

TRUSSVILLE -Every two years the Alabama High School Athletic Association goes through the process of reclassification and region assignment.

It is an exercise based entirely on two factors. Enrollment numbers and map location. Those were the sole factors that led the AHSAA  to assign Hewitt-Trussville High School to Region 4 where it will be one of only two teams not located in the Huntsville area. While the sorting of the data and team placement may prove inconvenient for fans and financially challenging for schools, it is the fairest way the AHSAA can find and their decision is final for at least two years. 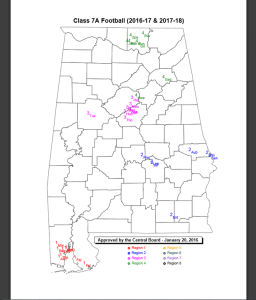 There had been speculation that the high school governing body of sports may expand the 7A classification from the 32 schools with the highest enrollment to 36 teams. That move would have sent Clay-Chalkville High School, with the third highest 6A enrollment, to 7A. But the AHSAA decided to stick with 32 teams in 7A. With that decision, enrollment became the primary factor.

A review of student enrollment sent former 7A and Region 4 participant Hazel Green High School in Madison County down to 6A. Huffman High School in Birmingham moved up in classification from 6A to 7A.

All that remained to be decided was the mapping of schools in 7A. Huffman, just barely more southern than Hewitt-Trussville, joined Region 3 made up primarily of Birmingham metro area teams with only Tuscaloosa County High School as an outlier. That move pushed Hewitt-Trussville, the northern most team in the metro Birmingham area, to the Hunstville-heavy Region 4.

It isn’t unheard of for a Birmingham metro team to find itself in the Hunstville area region. Four years again, before there was a 7A classification, a similar set of circumstances sent Clay-Chalkville to the 6A region packed with Madison County teams.

Cougar coach Jerry Hood said there can be some challenges to being in a region with teams so far away.

“The main thing it does, it hurts your home gates,” Hood said. “The travel isn’t too bad. Hewitt needs to have a good balance of home games with teams who traditionally travel well and those teams that don’t.”

The move impacts varsity football more than other sports and teams. The middle school, freshmen and junior varsity, for instance, won’t be required to play the Region 4 football schools.

Other sports, such as volleyball, basketball, baseball, softball and soccer will play in Region 7 with two Huntsville area teams, but not the additional four that varsity football will face each season.

Volleyball, basketball, baseball, softball, and soccer will play in 7A Region 7