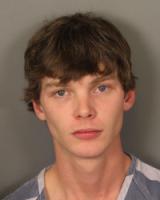 JEFFERSON COUNTY –When a Jefferson County sheriff’s deputy spotted a suspicious vehicle at a car wash, he stopped to investigate. What he found led to the arrest of James Russell Moore, 25, of McCalla.

Just before 3:30 a.m., the deputy notice a van parked at a self-service car wash in the 5000 block of McAdory School Road with no one around. Upon investigation, the deputy spotted an office door that had been pried open.

When the deputy looked inside the door, he witnessed a man in a ski mask using a power grinding tool in an attempt the break into the money box on a vending machine.

The deputy, unobserved by the suspect, called in additional units. When confronted, a statement from the sheriff’s office said the man uttered several expletives and complied with the deputy’s orders.

Moore is charged with burglary, criminal mischief, and theft of property. He is being held in the Jefferson County jail with a bond set at $36,000.