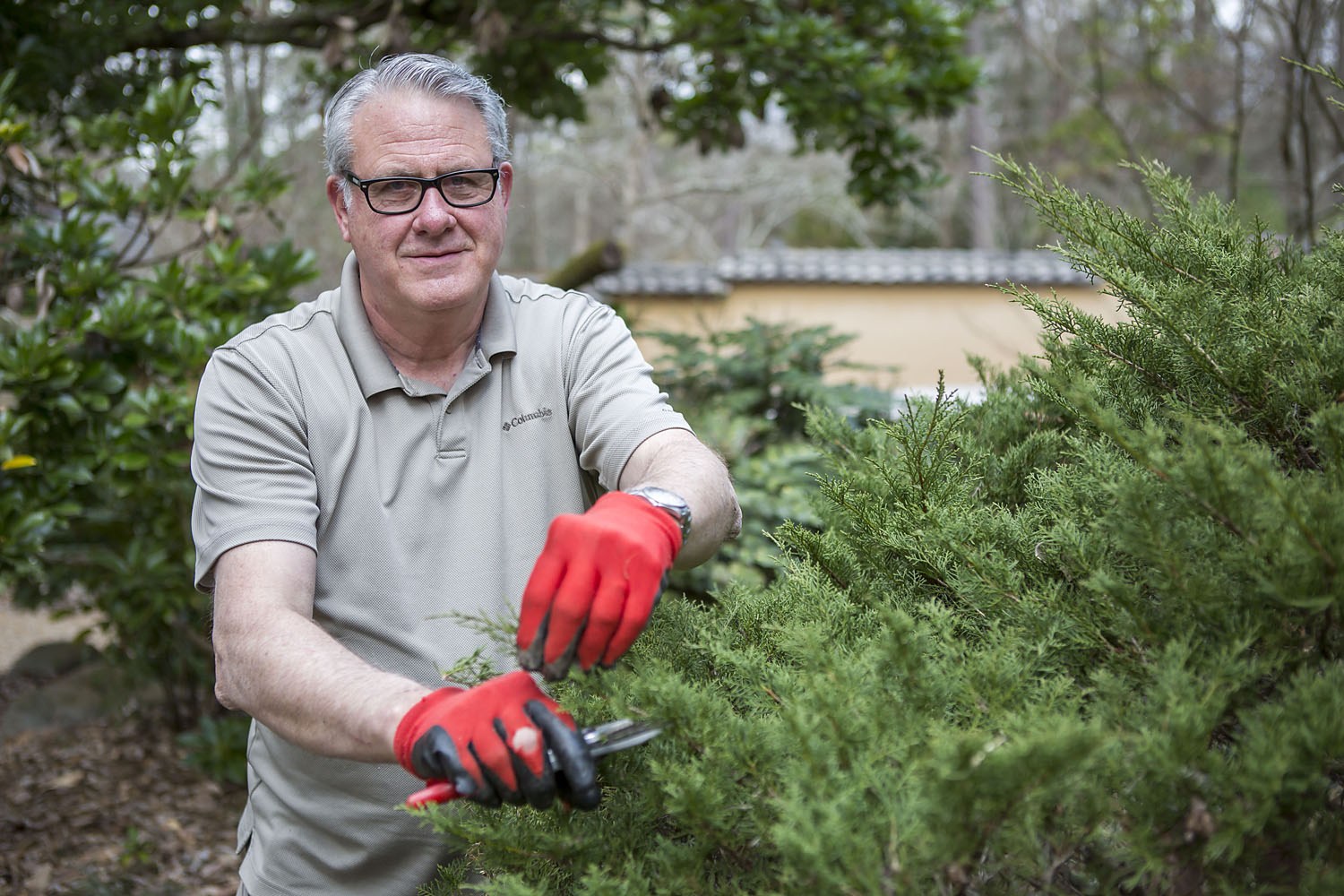 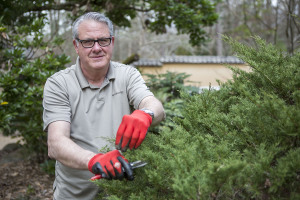 “A lot of people don’t’ realize that the South has really (gone from) in 1966 being a sort of an impoverished part of the country to being the number one economic driver in the country. And really in a matter of thirty years. And that’s an amazing thing that happened.” -photo by Ron Burkett

“My goal was and always has been that Southern Living is not for the wealthy individual.  It is for the middle-class Southerner who enjoys the good things. In that respective, it says you can be serving barbeque one night and cordon bleu the next night,” said Floyd, summing up the magazine’s core concept from his home in Trussville.  “So you want to make sure you have diversity but a homogeneous diversity with ‘south’ as the undercurrent.  So that’s the way we developed the magazine.”

As Southern Living celebrates its 50th anniversary this month, John Floyd has every reason to reflect on the success of the magazine.  Although he first joined Southern Progress in 1977, Floyd’s tenure as editor-in-chief of Southern Living magazine spanned from 1990 until 2008, an incredible eighteen years.

Magazine theology dies hard and Floyd still easily slips into editor mode.  “You only have about 40 seconds to sell a magazine in the grocery store – usually about 7 seconds.  So generally they look at the picture and one key word.”  As he reflects on his time at the magazine, two key words surface that summarize his own tenure:  Evolution and connection.

According to Floyd, these two interlocking concepts were key to the magazine’s success, despite the challenging period of the launch.  “When Southern Living was conceived, it was a huge risk,” he stated, addressing the negativity surrounding the South in 1966.  In fact, the phrase, “modern south” was coined to address the forward-progress of the culture at that time.

“A lot of people don’t’ realize that the South has really (gone from) in 1966 being a sort of an impoverished part of the country to being the number one economic driver in the country.  And really in a matter of thirty years.  And that’s an amazing thing that happened.  By the time it started in February of 1966 to the time I became editor, we were a major economic force in this country.  One of the things that we spent a great deal of funds on was to look at our readers and find out what our readers wanted.”

It is a stunningly simple concept that has worked.

The magazine canvassed readers on a monthly and yearly basis to better understand what readers craved.  But, more importantly, it was not afraid to strip away the “gloss” in favor of more authenticity and simplicity. “For instance, we really started realizing how important weddings were in the South,” said Floyd.  “We had looked at a lot of wedding publications but they weren’t doing real weddings.  They were always sort of manufactured.”  According to Floyd, the focus of the Southern Living lens became more relatable, ditching the fake wedding cakes used in other shoots, and striving for more realistic expectations.  “…your daughter doesn’t’ want to see a picture of a bride more beautiful than she’ll ever be.  You want to be able to picture yourself.  So we picked a picture that was just very connecting and titled it ‘Simply Gorgeous.’  And it was a runaway hit.”

This grassroots connection and unique understanding of southern culture changed the face of publishing.

Floyd brightened with the ease of a friend recalling an inside joke, “The phrase ‘Can you find it in Buckatunna?’ was used so often in the Southern Living test kitchens that it was eventually printed on a tee-shirt.”

Buckatunna is a town in eastern Mississippi that is so small that the staffers used it as a litmus test for small-town availability of ingredients.  If you couldn’t locate the necessary ingredients in Buckatunna, Mississippi, the recipe might need an adjustment. 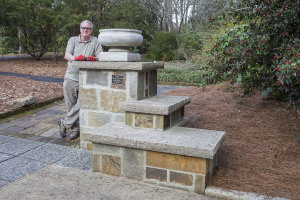 According to Floyd, one of his greatest personal and professional accomplishments is giving the Southern Living audience the inspiration and confidence to make quality improvements to how they live. -photo by Ron Burkett

This very real reader connection is what set the publication apart from others at the time.  It not only brought the magazine to coffee tables but to kitchen counters, potting sheds and suitcases.

In fact, Southern Living – and particularly the magazine’s original recipes – has become so interwoven with southern culture that many no longer recognize the original source.  One little-known fact about the magazine’s test kitchens is that staffers were routinely challenged to develop recipes using sponsor ingredients.  This mother-of-invention task led to such popular and quirky dishes as Pam-spray croutons, Dole Smoothies and the classic Milky Way cake.

But don’t mistake this rather pedestrian approach as lighthearted. “…it showed the power of the magazine to advertisers,” explained Floyd.  Understanding that the release of a new recipe might cause ingredients to fly off the shelves, staff often touched base with local grocers as a courtesy.  It was not uncommon to see key shelves double-stocked and flagged with “as seen in Southern Living” signs, underscoring the fierce economic impact of the magazine.

Food, home, gardening, travel – all synonymous with southern culture – have been the framework of the magazine since its inception.  Yet all have all followed the fluid thinking of readership over time.

“Food remains an integral part of southern culture and has its place in the media.  Even so, it changes as the reader’s approach to food changes,” explained Floyd, addressing the pendulum swings where healthy and convenience foods have polarized and merged over the years.  “What you’re seeing is a magazine that is evolving as the South evolves.  As its reader’s evolve.”

According to Floyd, one of his greatest personal and professional accomplishments is giving the Southern Living audience the inspiration and confidence to make quality improvements to how they live.

Pam and John Floyd chose to raise their sons, Alex and Ryan, on the eastern side of Birmingham in Trussville, giving a comfortable space between work and family life.  Both sons have settled nearby, one in Crestline and one most recently in Trussville.  As son Ryan and daughter-in-law Samantha worked to make their new home their own, the Floyds helped them tackle home improvement projects.  While this particular instance was decidedly personal, that same trickledown effect is repeated countless times on a broader scale, which pleases Floyd.

“People see things and they realize they work.  They may not know why they work, but realize that they do.  That is what impacts the community even if they are not readers.  That is the success of the magazine.”

This practical, sleeves-up, hands-on connection is reflected in John Floyd’s own approach to life.  John, with a horticulture degree earned at Clemson, was hired as Senior Horticulturist by Southern Living in 1977 and held various leadership positions before assuming the title of Editor in Chief in 1990.  He became Vice President of the magazine two years later.  Yet Floyd’s decision to retire at age sixty seems surprisingly pragmatic.

“I always felt like I needed to retire, to not get past the reader’s age.  The average reader age has always been around forty-five or forty-six,” he explained.  “The magazine business is very different.  It’s all built on reader connections.  When you have 18 million readers a month in

seventeen states, you’ve got a little different perspective to look at.”

But retirement might be a gray area for Floyd.  In addition to volunteering every Tuesday in the Japanese Gardens at the Botanical Gardens, he has created a successful blog (Birminghamgardeningtoday.com.)  According to Floyd, the blog fills a much-needed vacancy for gardening knowledge at the local level, offering landscape design advice and Q&A from industry professionals such as himself.

“At one year old, it’s just a baby trying to crawl,” said Floyd.  His desire is to see the local, backyard gardener have a reliable and professional source for information beyond the extension service.  He also embraces it as a place where he can give forthright advice without heavy censorship.  When asked whether he would like to see it grow as an industry project, he was quick to point out that he doesn’t want to see it outgrow itself too quickly or to rely too heavily on advertising.

But, he said with a smile, “The next great wave of media is local media.”

For thirty years John Floyd was a man who seemed more comfortable drawing attention to the written word rather than himself.  He still is.  And the summation for his success in publishing a southern culture magazine is both profound and encompassing.

“At some point we stopped looking at ourselves through the same lens that others viewed us.”