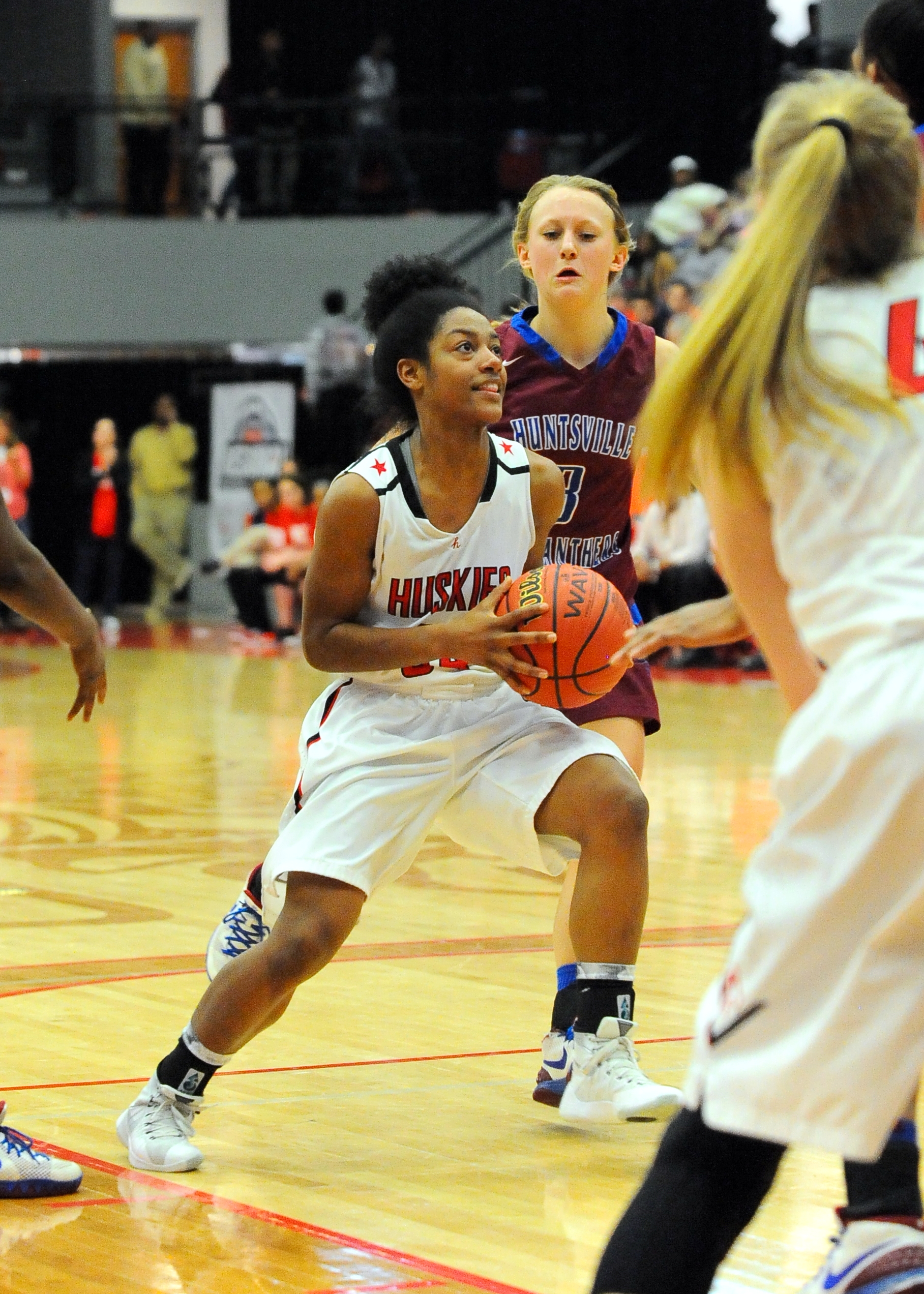 Posted By: Tribune Staffon: February 18, 2016In: Sports
Print Email
By David Knox
JACKSONVILLE — Bailey Berry didn’t hit a 3-pointer in the first half. But the Lady Huskies’ sharpshooter made up for it in the second half.
Berry hit a key 3-pointer with 5 seconds left in the third quarter and drilled another early in the fourth quarter as Hewitt-Trussville defeated Huntsville 52-40 in the Northeast Regional semifinal inside Pete Mathews Coliseum on the Jacksonville State campus. 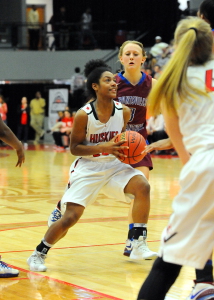 Lady Huskies will make their first ever trip to the regional final.
Phot by James Melton

The Lady Huskies will make their first appearance in a regional final when they take on Buckhorn on Tuesday morning at 9, also at Jax State.
Berry finished with three treys on the way to a team-high 14 points, but it was a team effort. Gabby Hill scored 13, London Coleman scored 12 and had a team-highs of 12 rebounds and three assists. Morgan Kirk, saddled with early foul trouble, scored 11 points in just 10 minutes of playing time.
And the interior defense of Kimberly Duffett and Mallory Posey managed to slow down Huntsville’s Kyla Whitehead. Whitehead scored 12 first-half points as Hewitt held a 22-17 lead. But the Lady Huskies held her to just three points in the seocnd half.
“We knew going in she was going to be a tough player and she gave us a lot of trouble at first,” coach Tonya Hunter said. “But we made some adjustments and the girls did what we asked them to do.”
Huntsville came out in the second half and erased the Hewitt lead in a hurry.The Panthers tied it up less than two minutes into the thrid quarter and took a 32-31 lead with 53 seconds left. But Hill found Berry open in the corner and she drained the 3 with 5 seconds left to give the Lady Huskies a 34-32 lead.
Hill drove down the center of the lane and nailed a runner for a 36-32 lead, then Berry connected again to push the lead to 39-32 and the Panthers couldn’t catch up.
Hewitt made 5-of-6 free throws in the final 1:06 as the Lady Huskies finished on a 7-0 run for the final margin.
“We were 18 of 22 from the free-throw line,” Hunter said. “That’s huge when youo’re in the playoffs.”
When Kirk did return she was fresh and made a key follow up on her own missed free throw. Her quickness forced several fouls and she knocked in 7-of-8 free-throws, 6-of-6 in the fianl 3:33.
The Lady Huskies (21-10) next will face Buckhorn, a 54-44 winner over Mountain Brook.
Share on Facebook Share
Share 0
Tweet
Share
Share