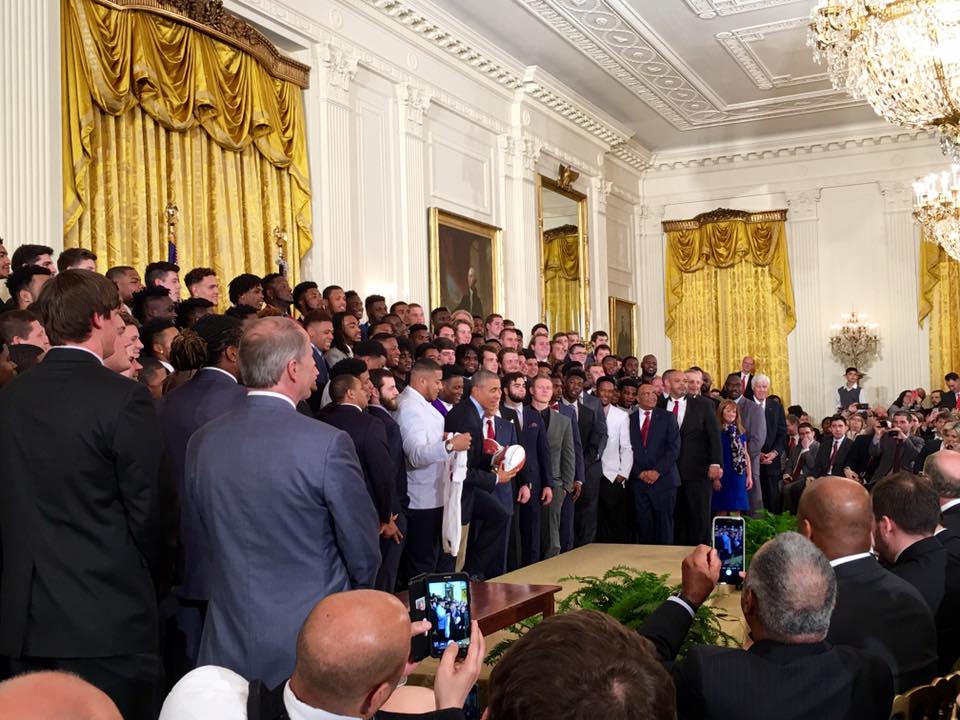 Jaime and Ethan Anderson of Trussville were on hand as President Barack Obama greeted Coach Nick Saban and the University of Alabama football team. Submitted photo

When the Tide rolled into Washington, Trussville was represented

WASHINGTON D.C. –The University of Alabama Crimson Tide made their fourth trip in seven years to the nation’s capitol to be recognized by President Barack Obama for yet another football national championship. It might be an experience that’s becoming “old hat” for the Bama team, but it was a thrilling first for a local mother and son.

Trussville resident Jaime Anderson spends a lot of time going back and forth from her home to the Pentagon in Washington D.C. in order to fulfill her duties in the United States Air Force. It was on her most recent work trip that she put her name in the hat to attend the ceremony that would honor her home state team. 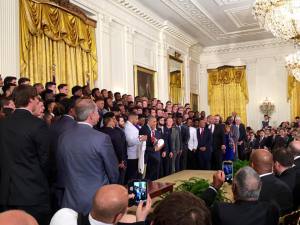 Jaime and Ethan Anderson of Trussville were on hand as President Barack Obama greeted Coach Nick Saban and the University of Alabama football team.
Submitted photo

“I reached out to some of my Air Force friends who work at the White House and inquired about the possibility of getting tickets,” Anderson said. “They placed our name in the que and we waited. We didn’t find out until the Monday prior to the event that we were on the list. Ethan and I made a one day round trip just to be at the ceremony. We left Birmingham at 6 a.m. and landed back home around 9:30 p.m. It was a long day, but totally worth it.”

The Andersons joined a host of congressional members and staffers from Alabama, as well as university and state dignitaries. Despite not having more than a few minutes to visit with the coaches and players, Jaime’s son, Ethan, was able to snag a few photo-ops with Coach Nick Saban, Jake Coker, and Minkah Fitzpatrick.

“It was awesome to be at the White House,” Ethan Anderson said. “It was very cool to see the President, Coach Saban and the football team in person. My favorite moment was when the whole team came into the room and when I got to meet Minkah Fitzpatrick.”

The biggest opportunity for Ethan Anderson, however, may have been seeing his favorite player up close, who is a pretty big guy in his own right.

“Derrick Henry is my favorite player,” Ethan Anderson said. “I was only a few feet away from him, and he is huge.” 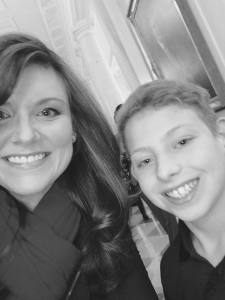 Jaime Anderson said the team, coaches and the President met privately, while those who were there to attend the ceremony were treated to a Marine quartet and allowed to mingle on the State Floor.

They were able to take pictures with Coach Saban and a few of the players as they left the ceremony, but for the most part the team was there to be congratulated by the President and any outside visitor interaction was kept to a minimum.

“Allowing the attendees full access to the coaches and team would have resulted in a riot for pictures and autographs,” Jaime Anderson said. “The secret service probably confiscated no less than six footballs that attendees had brought for signatures; they were not allowed on the State Floor. I thought it was really fantastic that the team was able to be together in such a historic place and be safe from a mob scene of fans.”

She was able to have a very brief exchange with Jake Coker about their Air Force connection.  Coker’s brother is a captain in the Air Force and his sister is currently a cadet at the U.S. Air Force Academy, where Jaime Anderson and her husband graduated in 1998.

“I thanked him for a great year of football and passed on my thanks for his family’s service,” Jaime Anderson said. “He was kind enough to take a picture with Ethan and we were thrilled to have met him.”

When she was young, Jaime Anderson said she didn’t understand the intricacies of the game, but fondly remembered the times she spent watching Alabama football with her dad, Trussville mayor Gene Melton, and listening to his stories of escorting Bear Bryant as a young Alabama State Trooper. 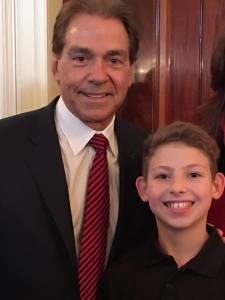 “It’s tough to explain to folks who are not from the South about our collective love for football, but when I do try to explain, I use one word-family,” Jaime Anderson said.

“Ethan plays football, so he already loves the game,” Jaime Anderson said.  “But I truly believe that when he is my age and beyond, he will fondly remember all the times his dad coached his football team and that one time his mom took him on a special trip to the White House to see Coach Saban and the 2015 College Football National Championship team.

“Time with family is just one of the many reasons we love football in the South, but it’s the only reason Ethan and I took this trip…and we had a blast.”