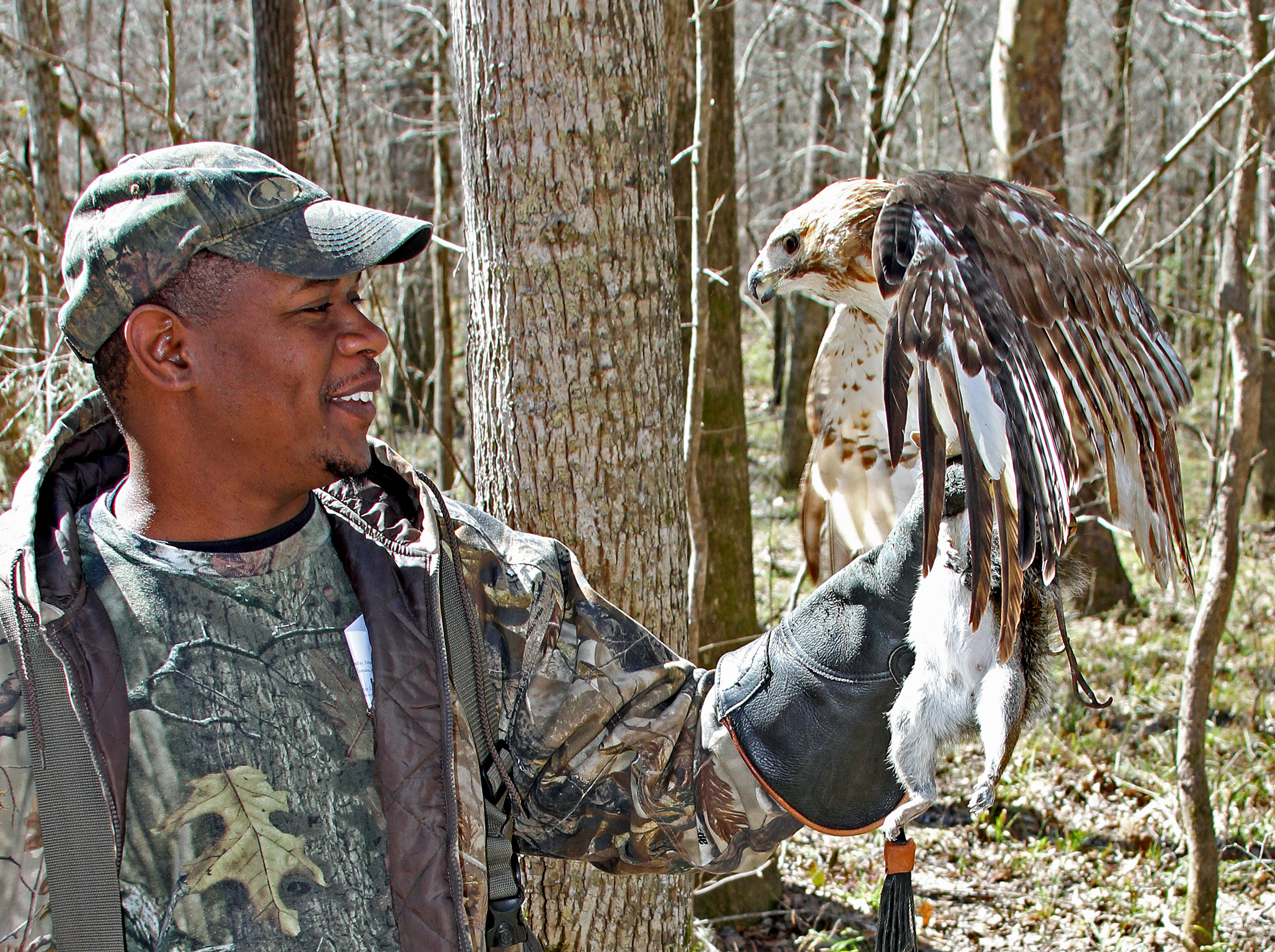 Larry Mullis’ red-tailed hawk, named Dixie, soars through the treetops to find a perch suitable for attacking a gray squirrel hideout. After several attempts, Dixie pinned the squirrel, hidden inside a patch of Spanish moss, to the oak tree. Photo by David Rainer

Squirrels vs. red-tailed hawks makes for a fun day of hunting in Alabama

Boy, did I go on a fantastic squirrel hunt last weekend in the Grampian Hills outside Camden, Ala. Our hunting party bagged a grand total of two squirrels. 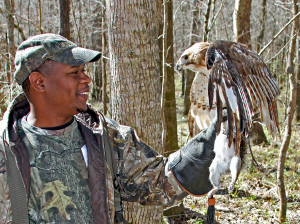 Larry Mullis’ red-tailed hawk, named Dixie, soars through the treetops to find a perch suitable for attacking a gray squirrel hideout. After several attempts, Dixie pinned the squirrel, hidden inside a patch of Spanish moss, to the oak tree. Photo by David Rainer

Say what? Two squirrels are barely enough to make a small pot of squirrel and dumplings.

What made it such an enjoyable, eye-opening hunt was the method by which the squirrels were taken – red-tailed hawks.

That’s right, the Alabama Hawking Association (AHA) held its annual meet last weekend, and its members brought a variety of hawks to the event with red-tailed hawks the most common bird of prey. The meet attracted falconers (the generic term for those who hunt with raptors) not only from Alabama but all around the Southeast. One participant escaped the Michigan snow to travel to Alabama.

The 70-plus participants in the meet were divided into manageable groups and turned loose on property donated for the hunts.

I accompanied a group of falconers from around the Southeast from Georgia to Mississippi to Tennessee, although the Tennessean, Jeff Fincher, had roots in Eutaw, Ala.

The hunting method involved heading into the woods and shaking vines and saplings to get a squirrel to reveal its location. At that point, the handler for the bird designated for that hunt released the raptor.

On the first hunt of the morning, Larry Mullis of Eastman, Ga., released Dixie, his year-old female red-tailed hawk after a squirrel was seen scurrying up a tall oak.

With eyesight so acute that the most common analogy used is it could read newspaper headlines at a quarter of a mile, the bird started a methodical stalk of the gray squirrel. Dixie flew from limb to limb in the surrounding tree until she was in an advantageous attack position. The falconers call it “laddering.”

With a leap from her perch, Dixie sailed toward the squirrel’s hideout, but was unable to connect with needle-sharp talons. Again, she laddered into position for another attempt. The squirrel made a break for it when Dixie’s wingtips slapped nearby limbs. With the patience of Job, she made another stalk and then another. 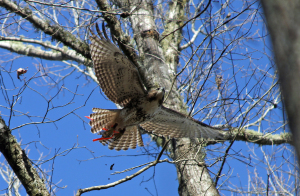 A full hour after Dixie left her handler’s gloved hand, the squirrel took refuge in natural cover. It scurried under a patch of Spanish moss, but it could not hide. The hawk attacked and easily pierced the moss with her talons to pin the squirrel to the tree. After a few minutes to dispatch the squirrel, Dixie sailed to the ground to begin consuming the catch.

However, Mullis managed to pull a bait-and-switch by offering the bird chunks of meat from a previous kill, and the squirrel was slipped away from the bird’s grasp to be used at a later date.

“That was worth the trip to Alabama,” said Gary Brewer, an internationally known master falconer and author of “Buteos and Bushytails,” a book about the art of squirrel hunting in dense woods with red-tailed and Harris hawks. Brewer, who hails from the east Texas town of Tyler, is recognized as one of the foremost authorities on training red-tailed hawks.

What Brewer didn’t realize was the next “cast” would almost match the first.

Symeon Robins, a choral teacher and choir director from Jackson, Miss., took his red-tailed hawk, named Gizmo, off its perch and headed back into the target-rich environment of a creek bottom. When a squirrel was spotted, Robins literally launched his two-year-old male bird into the air, and the hawk began the laddering process that is apparently innate in the birds of prey accustomed to hunting in forested areas.

After achieving a vantage point, Gizmo sailed toward the squirrel’s hideout. It was a near-miss, and the squirrel took advantage to quickly change trees before the bird could regroup. One attack resulted in the squirrel doing a u-turn on one of the larger limbs, only to have Gizmo follow suit. With only fractions of inches to spare, the squirrel managed to escape. Gizmo made several more attempts before the prey made a fatal mistake. The squirrel bailed out of a tree and hit the ground, attempting to make it to the den tree. In a blurring flash of wings and talons, Gizmo pounced on the squirrel and the hunt was over.

“Two for two,” Brewer said. “It doesn’t get any better than those two hunts.”

Joe Ryan of Dothan, Ala., a master falconer and president of the AHA, said there are about 60 or so active falconers in Alabama who hold a meet once a year to practice what turns into their passion.

Falconers in Alabama are required to obtain a permit from the Alabama Wildlife and Freshwater Fisheries Division and can have up to five raptors at any given time. Falconers are limited to trapping two raptors in any calendar year.

One of the reasons raptors need to be replaced is sometimes they just keep going once they are released on a hunt.

“They are not bound to us by any means,” Ryan said. “We follow them wherever they want to go. Sometimes they leave and don’t come back. To get into falconry is definitely a lifestyle change. I fly every day or every other day, depending on how much time I have.”

The birds are meticulously cared for to the point the raptor is weighed on digital scales daily to try to ensure the bird is healthy and to prepare it for a hunt.

Germana said the red-tails, which are the easiest to keep and train, will hunt squirrels, rabbits and mice. The kestrel usually hunts sparrows and starlings, an invasive bird species.

“Everything we do depends on the bird’s weight,” Germana said as his kestrel tried to break free of its tethers. “Every day you weigh them before and after you feed them. You feed them enough to where they drop a small amount of weight to where they are responsive and want to hunt. You want them just a little bit hungry. Every bird is different. I’ve had red-tails that hunt at 750 grams, and I’ve had one that hunted at 900 grams. This little female kestrel hunts at 96 grams.

“Falconry is just an adrenaline rush. It’s the most amount of fun you can have, killing a single squirrel with a red-tail. It’s a lot of work for one squirrel, but it’s a blast.”