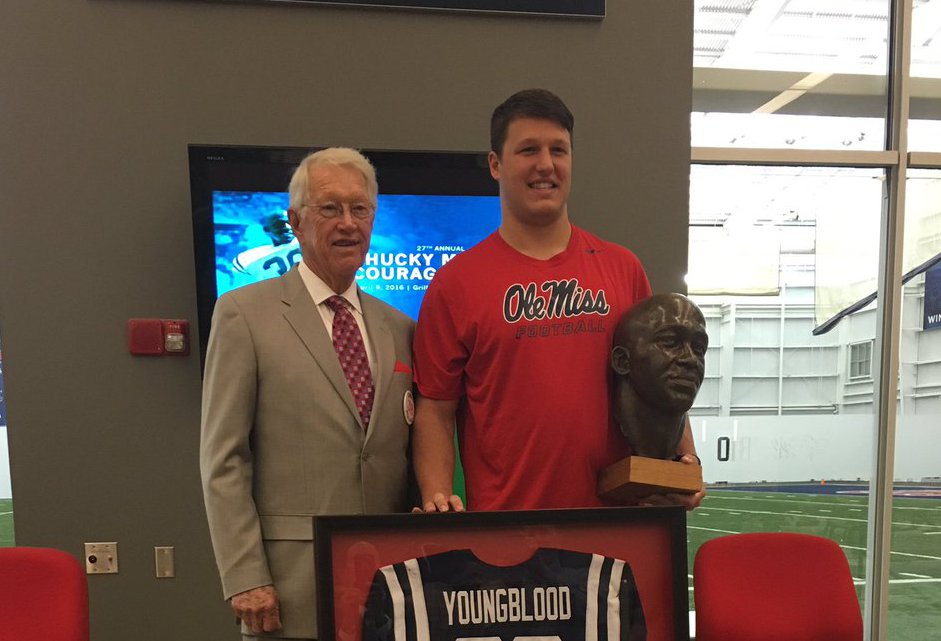 OXFORD, Miss. — Ole Miss handed out its annual spring football awards Saturday, headlined by senior defensive end John Youngblood of Trussville being named the 2016 Chucky Mullins Courage Award winner. Youngblood, the former Hewitt-Trussville standout, became the 26th recipient in the 27-year history of the award when it was revealed at Saturday’s breakfast ceremony, presented by the M-Club. 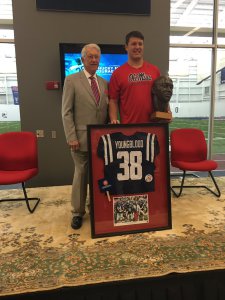 Youngblood will wear Mullins’ No. 38 jersey throughout the 2016 season. The award, sponsored by Phi Beta Sigma fraternity, honors the late Chucky Mullins, who had his Ole Miss career end during the 1989 Homecoming game against Vanderbilt when he was paralyzed after making a tackle of Vanderbilt player Brad Gaines. After returning to his studies at Ole Miss, Mullins passed away May 6, 1991. Youngblood was selected from among several veteran defensive players by head coach Hugh Freeze and the Rebel coaching staff. The award is presented annually to an Ole Miss upperclassman defensive player that embodies the spirit of Mullins — courage, leadership, perseverance and determination. “Credit Coach (Billy) Brewer for being a driving force for this award and to Brad Gaines for his relationship with Chucky,” Freeze said. “Chucky had toughness, and a sacrificial heart. That’s what we think of as we prepare our young men for life, because that’s the biggest battle we’ll ever face.” Youngblood has been a key contributor on each of the last three Rebel squads that advanced to the Music City Bowl, Chick-fil-A Peach Bowl and Sugar Bowl. As his role on the defensive line has increased each year, so has his production, including 19 tackles, 1.5 tackles for loss and a pass defended last season. He is known as a locker room leader and a standout in the classroom, as well.

“This is a great honor,” Youngblood said. “I’m a little numb right now and I know my teammates were also worthy of this honor. I’m humbled and honored to be wearing Chucky’s number.”