LATEST NEWS
Home Sports Who are the Alabama Crimson Tide ‘Assassins’ to watch this A-Day? 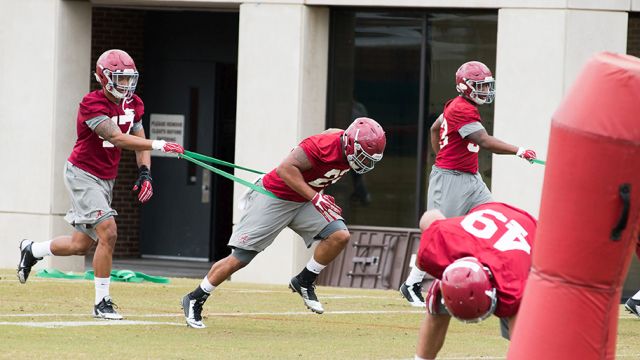 Who are the Alabama Crimson Tide ‘Assassins’ to watch this A-Day?

ArDarius Stewart unveiled a nickname for the Alabama receiving corps following the final tuneup for the Crimson Tide’s A-Day game at 2 p.m. Saturday, which is being broadcast on ESPN.

His name for them: The Assassins.

Responding to a question about the strength of his unit, the junior wide receiver talked about the equilibrium that still exists in the offense.

“It’s still a balance, I believe, because we still have Bo (Scarbrough) and all those guys at running back,” he said. “When we tie this all together, you’re going to see that it’s going to be a dangerous combination having the Assassins on the outside and the guys that can run it on the inside.”

Graduate transfer Richard Mullaney, then-freshman Calvin Ridley and Stewart were mainstays on the outside in Alabama’s push to the 2015 national championship. Despite Mullaney’s departure, the Tide has Cam Sims back from his spring 2015 knee injury and Robert Foster back from the shoulder injury that ended his 2015 season in the third game.

Stewart said the wide receivers are assassins because they’re the ones who turn in the clutch performances.

“We’re going out there, throwing the ball up, sacrificing our bodies,” the Fultondale High product said. “I consider the receivers assassins. I tell them that all the time.”

Senior defensive back Maurice Smith said the receivers can be better than they were last season. 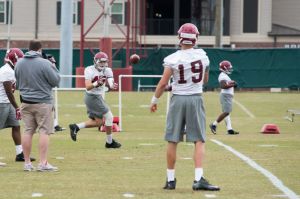 “Obviously, they’ve got a lot of talented guys back there on that receiving corps,” he said. “Going against them every day helps us get ready for competition like (opening game opponent) USC and all the spread teams we have to play. They do a good job of blocking, so we get the whole case with them. They’re just a good, all-around receiving group.”

Stewart is equally complimentary of the secondary.

“It’s a constant battle, a constant struggle,” the receiver said. “The defense that we have is amazing. It’s tough going against those guys and it kind of makes it easy going into the season.”

So who’s the best receiver? Smith says it’s too tough to call.

“Any time we go up against anyone, it’s a battle, at corner or coming down in the slot,” he said. “They’re all versatile, so it makes it difficult to play.”

Versatility at receiver will be evident at A-Day in Bryant-Denny Stadium.

“Everyone’s bouncing around from Y to Z, X,” Stewart said.  “Everyone’s playing everything. That’s what we’re trying to get in this year so we can just jump in and go to a spot instead of just being in one set position.

“Everyone’s contributing,” he said. “We’re a band of brothers in that room and we’re just trying to get better all together.”