Earth Day is satisfying work for Trussville Gas and Water

TRUSSVILLE –The annual sight of volunteers walking down roads with trash bags in hand is pretty common in Trussville. For 12 years, the Earth Day celebration has brought out hundreds of citizen volunteers each year to pick up trash and debris throughout the city.

But the event doesn’t just happen. It requires a lot of work and planning. Most importantly, it requires a committed sponsor to step up and organize all facets of the community service project. That sponsor since 2004 has been Trussville Gas and Water. 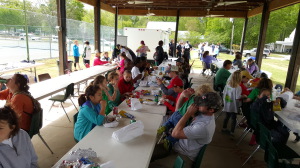 Saturday was the latest renewal of the citywide event. Because of the utility company’s commitment, Trussville looks a lot cleaner and a lot prettier today.

“We’re thankful for the opportunity to be a part of the communities where we provide water and natural gas service and our sponsorship of Earth Day is part of our commitment to the area,” general manager Mike Strength said.

According to Strength,  former general manager Bill Wingate thought it was an excellent fit for the utility to be involved in keeping the community clean.

“As a water system that uses groundwater from the Trussville area to provide drinking water, we have a vested interest in reducing pollution and raising awareness about proper disposal of materials,” Strength said.

It’s an event that Trussville Gas and Water wants to continue. An important part of that continuation is showing appreciation to the hundreds of volunteers that show up each year to get their hands dirty picking up the trash.

“It has grown a quite a bit since those early days,” Strength said. “The participants are primarily groups with some school affiliation, but we also have civic groups such as Boy Scouts, Girl Scouts and the Sea Cadets.

“For several years, we also had people providing community service from the court system involved. This year, participants collected 295 large bags of trash. Additionally, some trash such as tires, lumber, and assorted debris is collected, but not bagged.”

Preparations for Earth Day begin months in advance and require coordination and support of police, fire, public works, parks and recreations and Trussville City schools. Bryant Bank always pitches in to helps us with distributing T-shirts.

On the day of the event, employees are on the Mall before 7 a.m. to prepare for the arrival of the many volunteers that do the work of cleaning up the community. 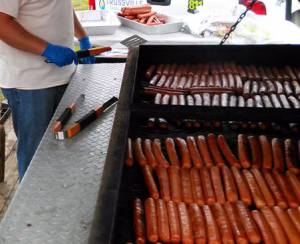 This year, that involved cooking 800 hot dogs and some veggie dogs, then bagging lunches with chips and desserts for all of the hungry participants. TGW employees then hand out food and drinks to everyone as they arrive back from a morning of cleaning the city streets.

“Courtney Dollar, head of our marketing department, coordinates the efforts of all these different groups and our Trussville Gas and Water employees that volunteer to work Earth Day,” Strength said.  “After many years or leading this effort, she makes it run very smoothly.  This was likely Courtney’s last Earth Day as the leader since she is planning retirement in December of this year. We’ll miss her leadership, but maybe we can get her to come back as a citizen volunteer.”