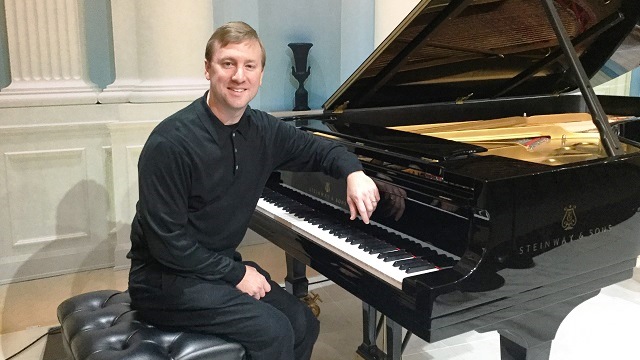 Kevin Grigsby seated at a piano at Alabama Piano Gallery in Vestavia Hills. The Alabama Power market specialist has been chosen to compete in the Cliburn International Amateur Piano Competition. (JPhoto courtesy of McClaran)

When you play music simply for the passion of it, recognition is unexpected — which makes it all the more impressive.

Kevin Grigsby, Birmingham Division market specialist for Alabama Power, has been selected to play at the Cliburn International Amateur Piano Competition in Fort Worth, Texas, on June 19-25.

Named for the late Van Cliburn, an American piano prodigy who became an international superstar in 1958, the competition invites 72 of the world’s best classically trained amateur solo pianists to compete before a panel of judges. 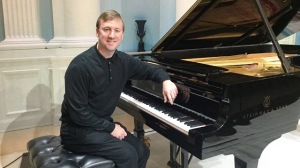 Kevin Grigsby seated at a piano at Alabama Piano Gallery in Vestavia Hills. The Alabama Power market specialist has been chosen to compete in the Cliburn International Amateur Piano Competition. (JPhoto courtesy of McClaran)

“We are very impressed with the level of talent in the 2016 Amateur Competition,” said Jacques Marquis, Cliburn president and CEO.

“I am honored and humbled,” said Grigsby, a native of Tarrant. “To be asked to play on the same stage as these great talents is a thrill.”

ou could say Grigsby has spent his whole life preparing for this moment. He began learning the piano at age 6.

“My dad believed there would be a shortage of church musicians in the next generation,” he said. “I started playing at First Methodist Church in Tarrant city when I was 12 years old.”

These days, Grigsby spends his Sundays performing at the First Baptist Church of Trussville. It has a 2,000-seat auditorium spacious enough for the 4,500-member congregation.

But Grigsby, a former Alabama Symphony Orchestra pianist who calls Chopin one of his greatest influences, is not intimidated.

“I’ve played in competitions, I’ve won competitions,” he said. “I spent the decade of my 20s trying to make a good living as a pianist.”

At 30, Grigsby joined Alabama Power in the residential customer service center. After two years, he moved to the business service center and later to Birmingham Division marketing.

And yes, his piano skills have come in handy on the job.

“Last year, I had a customer at an assisted-living place doing some new construction,” he said. “We wanted it to be all-electric, and it turned out that way.”

“We were walking through and there was a piano; I sat down and played ‘I’ll Fly Away,’” he added. “The owner of the place plays piano, too. Before you know it, there was a group of folks who sat down and we were singing some good Southern Baptist hymns.”

At the Cliburn competition, Grigsby will face some tougher customers: seven judges from five countries. Olga Kern, the jury chairman, is from Russia, where Cliburn won a prestigious Tchaikovsky piano competition at the height of the Cold War between the U.S. and the former Soviet Union.

The musicians, representing 21 nations, will begin by playing an eight- to 10-minute program of their choice. The contestants will be whittled down to a final six, who will play a predetermined movement of a concerto in the final round.

“It’s like a golf tournament on steroids,” said Grigsby.

If he wins, Grigsby will join another Alabama native, Birmingham ophthalmologist Drew Mays, who won the fifth international Cliburn competition for amateurs in 2007.

But while passion fuels Grigsby’s playing, the drive to compete has another motivation.

“My son is 10, my daughter is 9,” he said. “They’re just starting to participate in competitions and festivals here locally.

“The point of this for me is not to memorize an hour’s worth of music,” he said. “The point is to show my children: This is how you prepare for an event like this. This is what it takes. I’ve told them that I’m prepared to see my name called out as the winner and equally prepared to be cut after the first round.”

“As prestigious as this competition is, he keeps things in perspective,” said Jon McClaran, general manager of the Alabama Piano Gallery in Vestavia Hills. “He’s a great family man and a great husband. We’re all rooting for him.”

Birmingham-area residents will get a sneak preview on April 23 when Grigsby plays a piano recital at the Alabama Piano Gallery. The program will feature Rachmaninoff’s “Etude Tableau Op. 39, No. 9.”