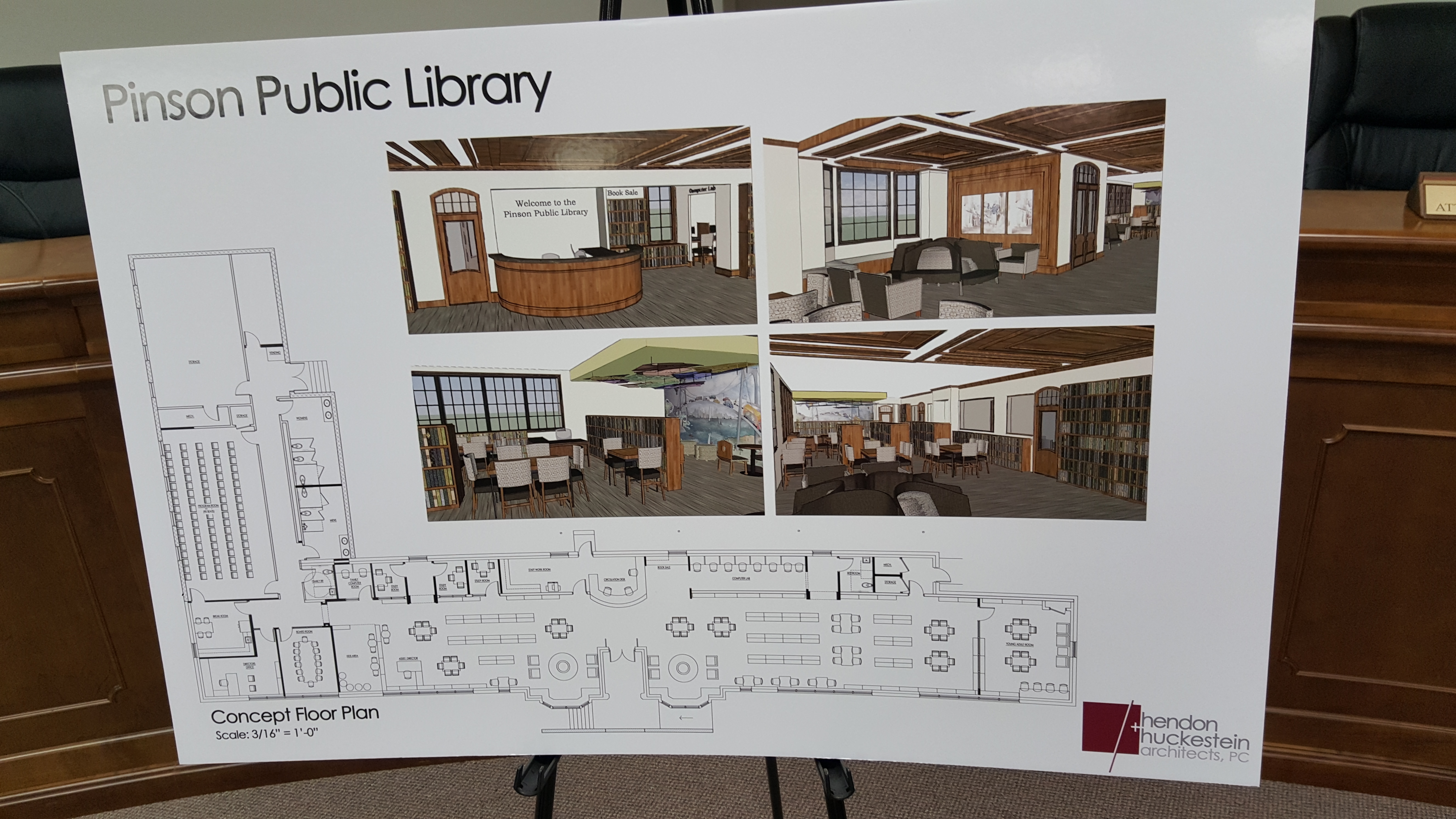 A mock up of the new Pinson Library was unveiled at the latest Pinson City Council meeting.

PINSON — Thursday night’s council meeting was a banner one for the Pinson Public Library. In addition to being given a prestigious award, plans for the new library at the Rock School were unveiled.

Work on the project could conceivably begin as early as three months from now. The first priority is to install a new roof. Erik Hendon of Hendon Huckstein Architects said roofing work could begin as soon as four to six weeks after Council approves the roof design. The roof constitutes phase one of the project with phase two being the primary demolition and construction.

Hendon said major construction could begin as soon as eight weeks after the plans are approved.

Hendon provided a sample floor plan for the new library complete with young adult and children’s areas, multiple computer labs, a room for special programs, study rooms, and an open floor plan for the library proper. It would also keep as many of the building’s historical design elements intact as possible.

The total cost of the project is estimated to cost around $1.21 million.

Although the library is a fairly recent addition to Pinson, it has grown so fast and received so many accolades that a larger structure was the logical next step even before the council acquired the Rock School.

As further proof of the library’s success, library director April Wallace announced that Pinson Public Library had received a huge honor from the Alabama Library Association – a silver ranking. There are three different awards levels; bronze, silver and gold. Only four libraries in the state received metal status and Pinson’s was the only one to win silver.

Silver status is based on circulation, programs, technology and numerous other criteria.

Wallace believes that at four years old, the Pinson library might be the youngest to have ever received metal status from the ALA.

The library was not the only organization to receive an honor. Ronnie Dixon of the Clay Pinson Chamber of Commerce presented a check for $3,500 to the Education Foundation. Councilman Joe Cochrane accepted the check on behalf of the foundation. The money was raised through the Butterbean Festival.

According to Cochrane, the money will be given to worthy recipients at the annual Education Foundation Banquet. The banquet will take place May 2 at 7 p.m.

After several meetings worth of discussion the council approved changes to the current sign ordinance. Changes include rules for highway commercial that allow signage to be 15 feet tall for a single business, up to 30 feet for a multi-tenant business such as a shopping center.  Other changes require “wrapping” of posts for signs, standards for signs on the facades of buildings and a size limit for signs not to exceed 100 square feet. The complete ordinance will be available at City Hall.

After discussing the library, parks and recreation, and sign ordinances for commercial businesses, it seems fitting that the council also turn their attention to the city’s industrial needs.

The mayor recommended the demolition of two old homes on Old Pinson Main Street. The property was purchased by the city for possible development as an industrial sector. The council voted to approve ETS Tree’s estimate of demolition at a cost of $5,750.

May 6 will be the mayor’s prayer breakfast at Grayson Valley Country club. The breakfast is for Pinson and Clay and residents are welcome to attend. The guest speaker will be Eddie Harris, a local pastor from Pinson. The cost is $10.