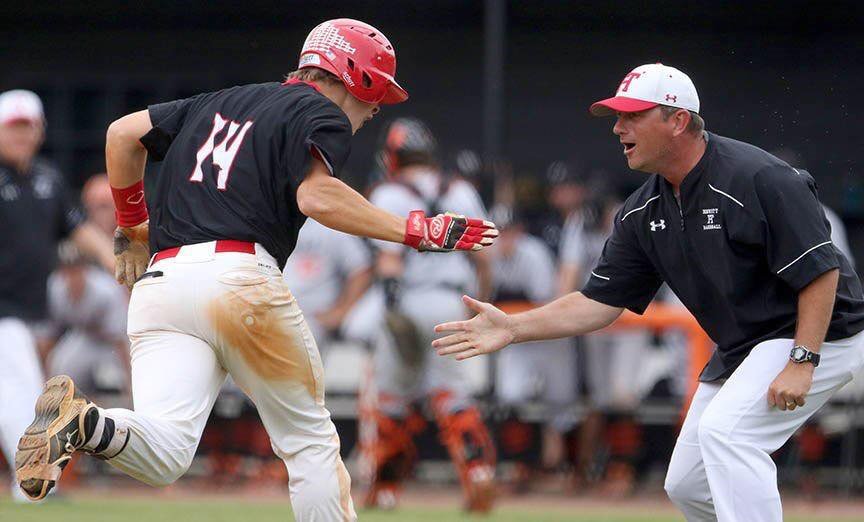 Jamison Stennis is congratulated after smacking a grand slam to win the Huskies’ second game against Hoover. (Submitted photo)

By Chris Yow, The Trussville Tribune

HOOVER — Jamison Stennis belted a grand slam in the eighth inning of Game 2 in the Hewitt-Trussville playoff series at Hoover last week to give the Huskies an 11-7 win over the homestanding Bucs. 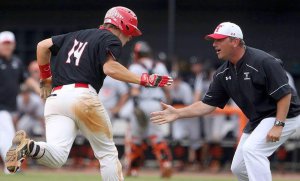 Jamison Stennis is congratulated after smacking a grand slam to win the Huskies’ second game against Hoover. (Submitted photo)

Ed Johnson’s three hits and four RBIs led the way in the series finale for Hewitt, while Cameron Moore earned the win in relief of Cameron Furr.

Hewitt did not get off to as fast of a start in the second game as it did in the series opener, but played stellar defense to keep the Bucs from gaining an advantage.

Game 1 of Hewitt-Trussville’s first round playoff series at Hoover was suspended following a lightning delay on Friday, but the Huskies finished off Bucs on Saturday by a final score of 18-4.

When the game was suspended, Hewitt-Trussville held an 18-2 lead over the Bucs, and forced the home team to burn through four pitchers in the contest. The Huskies were just three outs away from securing the win in Game 1 before the suspension.

Hewitt-Trussville’s bats exploded in the first inning of the game, and never cooled off. The Huskies also got a gem from starting pitcher Carson Skipper.

Through five innings, every hitter in the Huskies’ lineup crossed the plate at least once. Ed Johnson led the way at the plate, going 4-for-4 with six RBIs, including a solo home run to lead off the second inning. He was a triple away from hitting for the cycle in the game.

Johnson was joined by several teammates who helped plate multiple runs in the game. Tyler Tolbert went 2-for-3 with a pair of RBIs and two runs scored. Stennis was 3-for-4 in the game. He singled twice in the first inning, driving in all three of his RBIs in the opening frame.

Others who drove in a run were Justin Booker, Cameron Moore, Josh Morgan and Skipper added an RBI as well.

The Huskies added one run in the third inning, three runs in the fourth and exploded again for four runs in the fifth inning before the flash of lightning stalled the contest.

On the hill, Skipper gave up two earned runs on two hits and struck out three Bucs hitters.

The Huskies will now travel to Oak Mountain in the state quarterfinals to take on the Eagles who ousted nationally-ranked Vestavia Hills in the first round last week.

The Huskies will likely face Gene Hurst in Game 1 on the mound. Hurst took the loss in Game 1 to Vestavia, but pitched middle relief in Game 3. The series is set to begin Friday at Oak Mountain. The doubleheader is scheduled to start at 4:30 p.m.