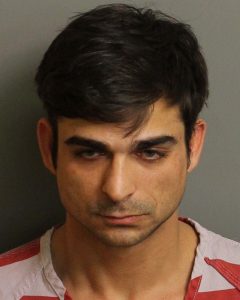 SHELBY COUNTY — Just after 9 a.m. on Sunday, May 8, deputies were called to investigate a report of a disorderly person at a church in 2200 block of Briarwood Way. It was

reported that 25-year-old Joshua Ray Davis became loud and disruptive in the church. He walked to the rear of the church, slammed the door and made an obscene gesture toward one of the deacons. Security for the church is provided by off-duty police officers. The officers tried to talk to Davis, but he was belligerent and uncooperative. He did provide them with identification.

Davis left the church before deputies arrived. After leaving, he called the church administrative office and told the secretary that he would come back and kill the police officers and everyone else. Deputies went to his home, but he was not located.

On May 9 an arrest warrant was obtained charging Davis with Making a Terrorist Threat. He was arrested without incident on May 11 and placed in the Jefferson County Jail where he remains. His bond is set at $10,000.