CLAY – You might expect a veteran team to be sharp during spring football drills, a team with say, 18 starters back off a 14-1 season.

Clay-Chalkville head coach Jerry Hood doesn’t have that luxury. But you would not have known that from Friday night’s spring game against Gadsden City at 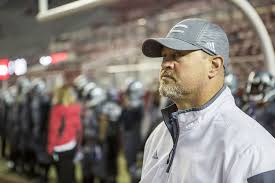 It was simply next man up.

A sharp, physical bunch of youngish Cougars – with 18 starters gone from last year’s 6A runner-up – thoroughly whipped the Class 7A Titans. It was 35-7 at the half and 41-7 when the varsity went to the bench.

Gadsden City’s reserves edged the Cougars’ JVs and freshmen 14-7 in the remaining minutes, but the talk afterward was all Cougars.

“I was shocked, really, the way it went, knowing how young we were,” Hood said. “The two things that impressed me the most was our defense played outstanding, and the offensive line. The physicality of the defense and the offense’s execution were both outstanding.”

Of course, Nico Collins returns, one of the top receivers in the country and the No. 2 prospect in the state by most measures. He didn’t disappoint, catching three touchdowns. But someone had to get him the ball, and it wasn’t not the Maryland-bound Ty Pigrome.

Sophomore-to-be Willie Miller took his place behind center and showed a lot of promise and pluck.

“He’s a smart kid,” Hood said. “His intelligence is what stood out. He’s got the athleticism to get first downs and make plays with his feet and he’s got a strong arm, but he really showed me some guts when he took a hit on a touchdown pass that a lot of quarterbacks wouldn’t stay in and take that hit. I was really proud of him.”

Quentin Young had a 33-yard TD run and Rod McCloud caught a TD pass. Defensively, the Cougars were swarming all over the field making big hits and forcing turnovers.

“Corey Lee was probably our defensive MVP,” Hood said. “He blocked a punt, scooped up a punt snap and scored and made a bunch of tackles.

“The things is, around here, the kids coming up have varsity experience because of the (large margin of victories the past few seasons). They put those pants on and we say, ‘Let’s go. No excuses, it’s your turn.’”

Their turn for real comes Aug. 19 – just about three months away – when Florence arrives at Cougar Stadium for the season-opener.